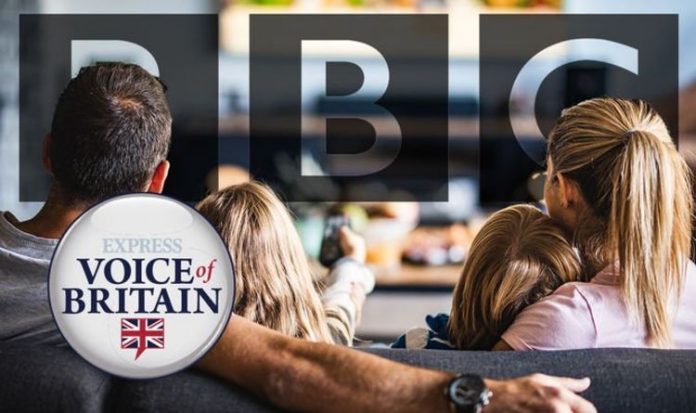 This week, the BBC announced they would be rising the mandatory licence fee by £1.50 from £157.50 to £159 from April. The news already sparked a strong reaction on Twitter and now Britons have vowed to boycott the BBC ahead of the licence fee increase.

In an Express.co.uk poll – which ran from 12pm to 10pm today – asked: “Will you boycott the broadcaster after another rise in TV licence fee?”

Out of 5,054 votes, 93 percent of people have said they would boycott the corporation due to the increased fee.

One person argued the BBC is not “good value for money” and said it is full of “Lefty agendas” and “woke producers”.

They said: “The enforced BBC TV licence fee is a tax… it is not good value for money.

“It is a broadcaster infected with Lefty agendas, woke producers and peculiar directors.

“It is anti-British, anti-Brexit, undemocratic and an abortion of a company.

“It is an unreliable news broadcaster, untrustworthy, schedules packed with repeats that are not worth watching.

“This must be the end at last.”

Someone else simply said: “The fee should be abolished and MPs expenses should be taxed.”

“Why should people have to pay to be insulted for a corporation not fit for purpose, biased and providing poor entertainment?”

Another reader said: “There are plenty of other channels to watch,

“The BBC News is so biased I never watch it.

“Never listen to BBC radio stations as there are so many better ones to tune in to.

“Why do I have to pay for licence when I don’t listen or watch BBC?”

People buying or renewing their TV licence after April 1 will pay the new higher fee.

Those already buying a licence on an instalment scheme which started before that date, such as via a monthly direct debit or weekly cash payments, will continue to make payments totalling £157.50 until it comes up for renewal.

The new cost equates to 43p per day, according to the BBC.