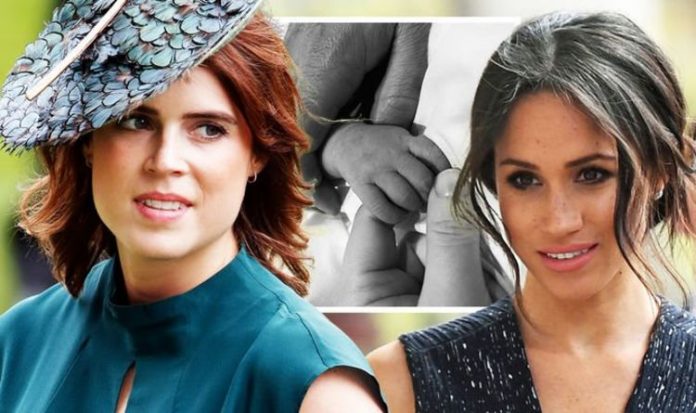 Eugenie gave birth this morning at 8.55am at The Portland Hospital, the same hospital where she was born herself. Both mother and baby are doing well and Eugenie’s husband Jack Brooksbank was present at the birth, the Royal Family announced in an official statement. The princess released the first picture of her little one on her Instagram, but did not give too much away, as all that can be seen is his little hand, being held by his mother and father’s.

Underneath, the caption was simply three blue heart emojis.

This picture has a striking resemblance to a number of pictures that Meghan Markle and Prince Harry released of their son, Archie Harrison Mountbatten-Windsor, in the weeks and months after his birth.

Archie’s christening raised some eyebrows at the time because the Duke and Duchess of Sussex decided that they would keep it private.

Instead of allowing well-wishers to gather outside the church, they had a secret ceremony and released only a few, select photographs.

READ MORE: Princess Eugenie could move back to Frogmore after giving birth

Princess Eugenie and Jack Brooksbank at their wedding in October 2018 (Image: GETTY)

One was a picture of Archie’s feet, which may have been an inspiration for Eugenie’s choice of just showing the hand of her newborn.

The other was a black and white picture of the couple holding Archie.

This choice of using black and white may also have inspired Eugenie to choose the arty format for her Instagram post.

Another picture with striking similarities is one posted by the Sussexes on Father’s Day.

The picture is a monochromatic picture of Archie holding Harry’s hand, with just the top of his head to be seen, which has obvious similarities to Eugenie’s picture from today.

It was not announced when Meghan went into labour and the couple also refused to have a photo op outside the hospital where Archie was born.

Instead, they invited the press to St George’s Hall at Windsor Castle a couple of days later.

Eugenie and Jack got married in October 2018 (Image: GETTY)

The private christening was also a surprise to many people who have been used to unfettered access to royal babies.

Princess Eugenie may be following in the Sussexes’ footsteps in choosing only a few opportune moments of when to release images of her son.

Eugenie’s baby, who is 8lbs 1oz, is her first child and the first grandchild of Prince Andrew and Sarah Ferguson.

However, he is the ninth great-grandchild of the Queen and Prince Philip.

Royal fans have gushed at the wonderful news, with hundreds wishing the family congratulations underneath her Instagram post.

One said: “Ahhh welcome to the world little one! Congratulations to the happy couple.”

Another said: “Huge congratulations! Welcome to another baby boy in the family.”

A third wrote: “Congratulations! Blessings to the parents and the little baby!”

Eugenie accompanied her pregnancy announcement in September 2020 with the above pictures (Image: Instagram (Princess Eugenie))

The royal baby’s name is yet to be released but there is excited speculation online.

Betfair spokesperson Sam Robsbottom said: “Royal fans are over the moon to welcome a new bouncing baby boy to brighten up the start of 2021 ‒ with Princess Eugenie and Jack expected to keep it traditional, Arthur is the 4/1 favourite followed closely by Godfrey at 5/1.”

Eugenie and Jack have been staying with Prince Andrew and Sarah Ferguson at The Royal Lodge during the late stages of the princess’ pregnancy, but may now move back to Frogmore Cottage.

Royal expert Russell Myers explained on the podcast Pod Save the Queen that coronavirus lockdown rules meant that families with a child under one can bubble with another household.

This would allow the new parents to move back home, but still get help from Eugenie’s parents when they need it.