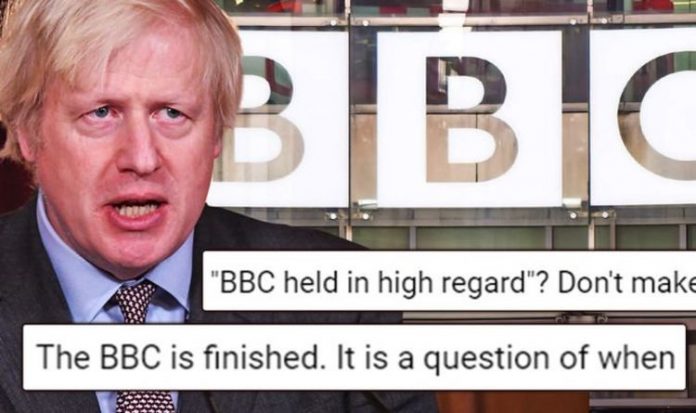 After four years in the role, David Clementi spent his last day as chairman of the BBC on Friday and sent a parting email to colleagues, where he decided to take a veiled swipe at Boris Johnson. Mr Clementi warned the broadcaster would be “diminished” if ministers interfered in its business and boasted that the BBC was held in “high regard” across the globe.

He wrote: “On the occasions I have represented the BBC abroad, I have always been struck by the high regard we are held in.

“We are one of the very few British institutions to be seen as world class.

“As I have argued elsewhere, it would be a colossal act of national self-harm if regulators or governments were to take steps which diminished the role of the BBC.”

Express.co.uk readers have reacted furiously to his comments, with hundreds condemning the “appalling” attitude of the BBC.

One person wrote: “I’m annoyed I am forced to fund things I don’t like.

“The BBC attitude is appalling and their opinionated propaganda is a disgrace.”

Another user said: “David Clementi who do you think you are threatening the UK Govt.

“If you had done your job the BBC wouldn’t be so detested an organisation. Defund it completely.”

JUST IN: Sturgeon warned SNP ‘has no money to campaign for independence’

Another user fumed: “The BBC cares more about its global reputation than their British reputation!”

Other readers made fun of Mr Clementi’s claim the BBC is held in high regard.

One reader said: “‘Held in high regard’? He’s not living in the same world as most of us.”

A second person wrote: “‘BBC held in high regard’? Don’t make me laugh.

“It is a Left-Wing, anti-British regime that needs to be closed down.”

Another reader simply wrote: “The BBC is finished. It is a question of when not if.

“This functionaries opinion is not worth anything.”