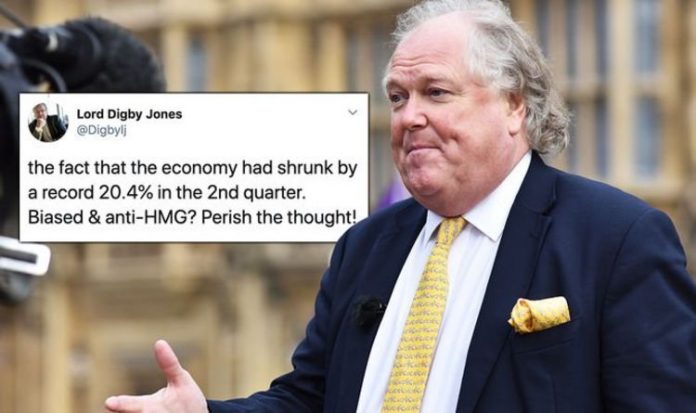 On Wednesday, figures from the Office for National Statistics (ONS) revealed Britain’s economy shrank by a record 20.4 percent between April and June when the coronavirus lockdown was tightest. This was the largest contraction reported by any major economy so far, piling the pressure on Chancellor Rishi Sunak to pump more money into the country to help it bounce back and save millions of jobs. But there were encouraging signs in June, when gross domestic product (GDP) grew by 8.7 percent compared to May as lockdown restrictions began to ease throughout the country.

This increase was also slightly above economists’ average expectation, a poll by Reuters found.

Lord Jones, a crossbench peer in the House of Lords, is confident the UK economy is firmly on the path to recovery, using predictions from the National Institute Of Economic and Social Research to explain his theory.

He tweeted: “The NEISR forecasts the UK economy will grow by an amazing 15 percent in the 3rd quarter.

“By the end of June, manufacturing had recovered half of its lost output.

“The economy grew by 8.7 percent just in the month of June. The recovery is set to be V-shaped.”

But the crossbench peer also took a swipe at the BBC’s coverage of the UK economy falling into recession, hinting it was “biased” and against the UK Government.

Lord Jones tweeted: “So what does the BBC lead with?

“The fact that the economy had shrunk by a record 20.4 percent in the 2nd quarter.

Jonathan Athow, the deputy national statistician at the ONS, said: “The recession brought on by the coronavirus pandemic has led to the biggest fall in quarterly GDP on record.

“The economy began to bounce back in June, with shops reopening, factories beginning to ramp up production and house-building continuing to recover.

“Despite this, GDP in June still remains a sixth below its level in February, before the virus struck.

“Overall, productivity saw its largest-ever fall in the second quarter. Hospitality was worst hit, with productivity in that industry falling by three-quarters in recent months.”

Chancellor Rishi Sunak insisted there were some “promising signs” the UK economy is recovering from its record crash during the coronavirus lockdown.

But he warned there is still too much uncertainty to know if Britain would experience a swift, V-shaped economic recovery.

Mr Sunak said: “What we do know is that there are promising signs.

“There’s still work to do and even as we recover many people are going to lose their jobs, already have lost their jobs, and we need to make sure that we are constantly focused on providing new opportunities for those people.”