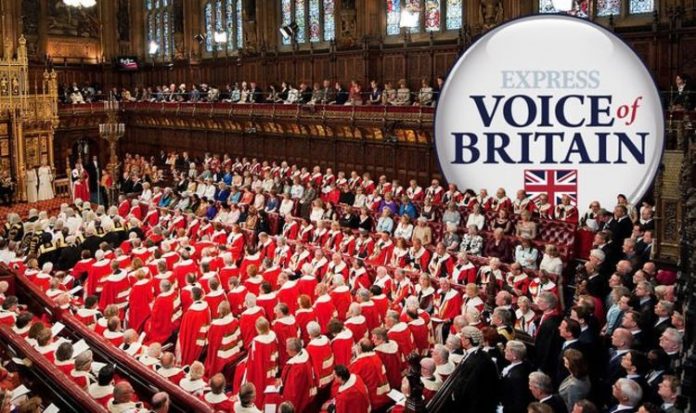 The running of the House of Lords comes at a significant cost to the UK taxpayer, with the number of peers now surpassing 800 members. Each peer costs the taxpayer around £30,000, each according to estimates by the Electoral Reform Society (ERS).

But it doesn’t stop there, as running costs for the Upper Chamber rose from £99 million to a staggering £117.4 million in 2018/19, according to ERS figures.

Now, an Express.co.uk poll which ran from 2pm to 7pm on August 14, asked readers, ‘After study exposes SHAMEFUL waste, should House of Lords be scrapped?’

A staggering 3,979 people voted and an overwhelming 98 percent (3,883) urged the government to scrap the House of Lords.

House of Lords should be scrapped (Image: Getty)

“All at our expenses. Let them keep the title and only be called on for a vote.

Another reader suggested the House of Lords should be an elected house excluding MPs, Civil Servants and friends of friends.

Someone else compared the House of Lords to the BBC and claimed they are “completely outdated in this day and age”.

Commenting on the data, a spokesperson for ERS told this website: “Voters will not be pleased with yet more unelected peers making their way in to claim expenses.

“The current system is ripe for exploitation, with peers having to do little more than sign in to claim their tax-free allowance.

Passage of a bill through Parliament (Image: Express)

“The fact that voters cannot hold them to account at the ballot box is a recipe for wanton disregard for taxpayers.

“The ERS has revealed in recent years how the taxpayer has been left with bills of millions for peers who barely contribute so much as a speech in the chamber.

“While many Lords do work hard, voters might feel less aggrieved about paying them if they actually had a say on who sat in the chamber.

“This is an expenses-scandal in the making, and the system is crying out for reform.

“A far learner, proportionally-elected senate of the nations and regions will help restore faith in democracy.

“At the moment, the loophole-ridden, scrutiny-free expenses set-up just allows distrust to sink deeper into our democracy.”

The group has launched a petition to scrap the House of Lords, following the news another 36 peers have been added to the Lords.

The petition has received backing from more than 400,000 people and calls for an end to new appointments to the Lords.

It argues the Upper Chamber should be replaced with a “fairly-elected chamber the reflects the UK”.

The Prime Minister’s brother Jo Johnson is also due to become a member of the Lords.

Despite the criticism towards some of the nominations, a No 10 spokesman insisted Downing Street remains committed to restructuring the House.

They said: “It remains the case that the size of the House of Lords needs addressing, but given retirements and other departures, some new members are needed to ensure the Lords has the appropriate expertise and it continues to fulfil its role in scrutinising and revising legislation.”

A House of Lords spokesperson said: “In return for funding the House of Lords, the taxpayer gets a highly effective and busy second chamber.

“In the 2019/20 financial year members of the Lords considered 779 amendments to legislation and asked the Government 6,482 written questions.

“This is the important process of improving legislation and holding the government to account in action.

“In the same period, Lords committees held 499 meetings and produced 123 reports, many of which were high profile and influenced Government policy and the public debate around crucial issues such as social care, regeneration and HS2.”