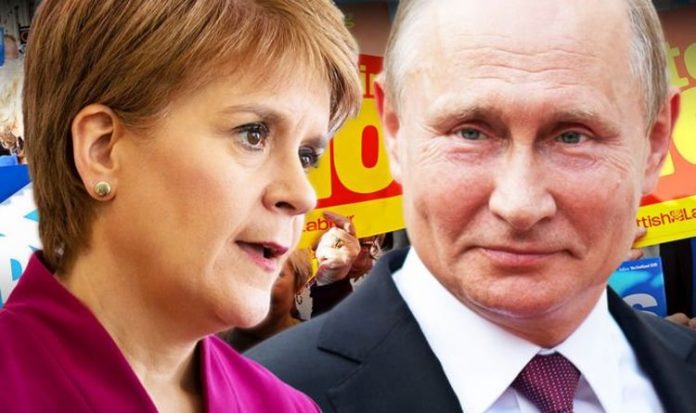 The release of a report on Russian interference in the UK has sparked concern over foreign influence in national democratic processes. The Intelligence and Security Committee’s publication claimed there had been “credible open source commentary” suggesting Russia had tried to influence Scotland’s 2014 independence referendum. Scottish Tory Miles Briggs told Express.co.uk that it was imperative for the SNP Government to investigate.

He said: “Looking back to that referendum, there was concern at the time over potential interference.

“That concern was pointed to and evident in the recent report.

“The Scottish Conservatives have been calling for the Scottish Government to now investigate that as well.”

Mr Briggs continued: “I think when you look back six years ago, it’s important that we do maybe consider what potentially had happened and what hasn’t been reported.

“We need to make sure that at no point in the future will we see that influence on any of our elections or potential future referendums as well.

“Social media seems like second nature now but at the time we probably weren’t as aware of how people’s views could be influenced.

“We didn’t really know that outside actors could actually pay and influence advertising to people.”

The Russian Foreign Ministry has called the report “Russophobia”.

The UK Government say they have been “fully aware of the significant and enduring threat” that Russia poses.

They have also accused Russian hackers of online attempts to steal information on the UK’s coronavirus vaccine.

Foreign Secretary Dominic Raab claimed that there was evidence that the documents on UK-US trade discussions that were used by Labour in the 2019 general election campaign had been brought to the party’s attention by Russia.

Shadow Foreign Secretary Lisa Nandy admitted to Sky News that her party under former leader Jeremy Corbyn had failed on their policy towards Russia.