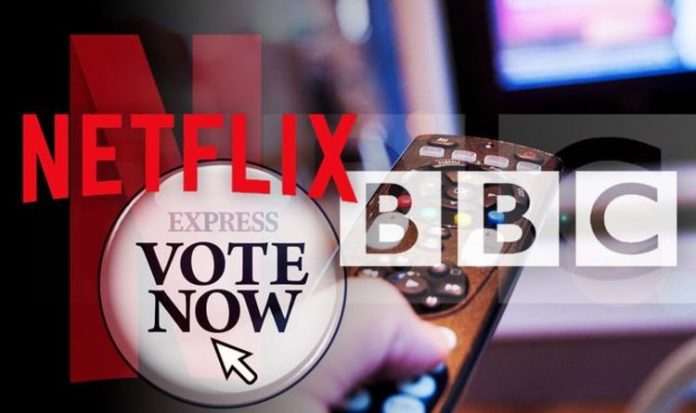 The Value for Audiences report said a subscription charge would cost more than double the current TV licence fee. The report attempted to show what good value the current set-up is, in comparison with rival streaming services like Netflix.

It said: “Taken together, a bundle of subscriptions providing advertising-free, high-quality services comparable with those offered by the BBC across video, audio and news would cost over £400 per year in comparison to a current licence fee of £157.50.”

The claim, reiterated by Director General Tim Davie as he unveiled the report, raised eyebrows among critics and politicians.

The Defund the BBC campaign group tweeted: “Tim Davie has claimed the BBC offers twice the value of Netflix but would cost 5.5 times as much, at an eye watering £400 per year (£33 per month), if they moved to a subscription model.”

They then urged people to “switch to on-demand and do your bit to #DefundTheBBC by legally cancelling your TV licence”.

Tory MPs were also quick to criticise the corporation – which has faced backlash over recent months after scrapping free TV licences for most over-75s.

Philip Davies, a former member of the Digital, Culture, Media and Sport select committee, told the Telegraph: “If the BBC is such a wonderful value for money, why does it continue to insist on the criminal law being in place to force people to pay for it?

“If they really believed that, the BCB would be happy to join Netflix and move to a voluntary subscription.

“Their desperation to avoid a voluntary subscription is the only proof we need that the BBC don’t really think they represent such wonderful value for money.”

Andrew Bridgen, MP for North West Leicestershire, added: “The fact that if you want to watch live TV you have to buy a TV licence even if you don’t wish to watch the BBC’s output is like going to the newsagent to buy a copy of The Telegraph and being forced to pay for a copy of The Guardian.

“The BBC is out of fashion, out of date and out of touch – and being out-competed by its competitors as the viewing figures show.”

Mr Davie also added fewer BBC shows would appear on streaming sites because it appears many viewers believe shows such as Peaky Blinders were created by Netflix.

Shows currently on Netflix and Amazon will now be moved to BBC iPlayer and BrtiBox once their current contracts have expired.

However, he did say he keeps an “open mind” on how the BBC could be funded differently

He said: “So when we next get the chance to review the structure of this then it may be worth reassessing.”

Those who watch live BBC TV and iPlayer must pay the annual fee of £157.50 or risk being fined up to £1,000 in addition to court costs.

The licence fee is the annual cost viewers must pay in the UK and funds the TV, radio and online services of the BBC only.

During the general election in 2019, senior Tory MPs attacked the BBC accusing the corporation of bias.

The Conservative party won several Labour-stronghold seats in the North of England over promises of Brexit and reforming the BBC.