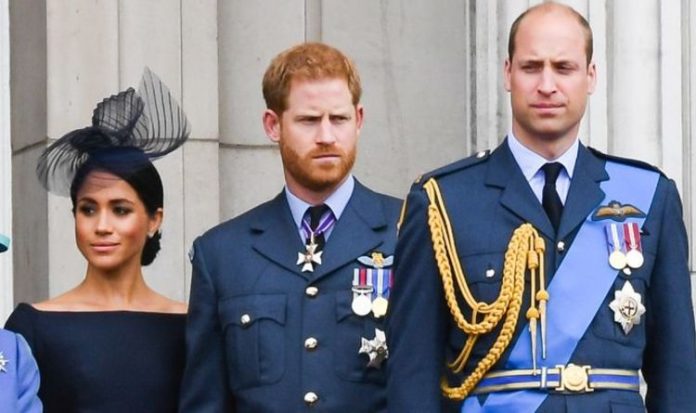 Prince William has been accused of making a “baffling choice” by not publicly supporting Meghan Markle against hate speech. This comes after the Duke of Cambridge posted an anti-racist messages to Twitter in response to a series of footballers being racially abused online following their matches. Us Weekly’s Royally Us podcast hosts Molly Mulshine and Christina Garibaldi discussed the furious backlash to the royal.

Ms Garibaldi told listeners: “It’s great that he spoke out about it, and they have spoken out about Black Lives Matter in the past.

“But a lot of people were criticising him online because Meghan has been bullied.

“A lot of people have been saying racist comments to her for years, and nobody from the Palace has spoken up.

“So a lot of people were praising him for speaking out about this but also condemning him for hypocrisy as well, asking where he was when Meghan was getting attacked online.”

Ms Mulshine agreed: “It is a baffling choice, and I would really be interested in hearing the conversations behind the scenes that led to this statement happening, and no statement ever happening to support Meghan.

“I just can’t really see where the benefit was for the Cambridges to stay silent throughout all of that.

“I think we’re seeing the ramifications of that with all the tension between them.

“Of course it’s always great to call out racism, but I just want to understand why this is the first time besides that other Heads Together campaign for BLM. If I was Meghan, I would be furious.”

Racist coverage of the Duchess of Sussex was addressed as far back as 2016 when she and Harry were still only dating.

The prince issued a statement that year, pleading for privacy and condemning the “racial undertones of comment pieces” and “outright sexism and racism of social media trolls and web article comments”.

However, there was no specification of the type of hate speech she was being subjected to.

Many commentators have suggested that Harry and Meghan’s eventual exit from the Royal Family was partially due to the racism the Duchess had experienced in the UK.