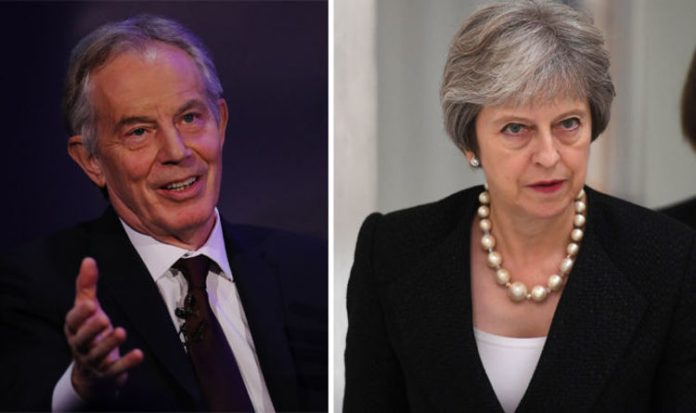 The former Prime Minister told BBC Newsnight the Prime Minister’s approach to Brexit was a “fallacy” and her current plan would not keep Brexiteers happy.

He said: “The whole fallacy in Theresa May’s approach.

“If she thinks this honours the Brexit mandate, it doesn’t honour what most people who voted for Brexit think, and we know that because they’re saying it.”

He accused her plan of handing victory to “elites” and “betraying” the millions of people who voted in 2016.

The former MP continued: “This is the real triumph of the elite, funnily enough.

“If the system kind of says: ‘Look, we voted to leave, leaving is really a pretty bad idea, so let’s do this halfway house, half in half out. Accept the rules, but you leave the political structures.’

“The irony is that the solution where a majority of the population for sure is going to say: ‘We don’t want that’.

“Because people like me will say: ‘Well, this is pointless’.

“And the true Brexiteers will cry betrayal. “

A staunch Remainer, Mr Blair said he thought the Prime Minister was trying her hardest to get a good deal, but the current approach wasn’t working.

Mr Blair added: “I stress all the time I think she comes at this from a completely well-intentioned viewpoint.

“She’s trying to do her best for the country in really difficult circumstances, I appreciate that.”

Mrs May has faced increasing pressure over the last fortnight following the Chequers Cabinet meeting in which she announced her Brexit plan.

Since then, ten ministers have resigned over her soft-Brexit approach, including the former Foreign Secretary, Boris Johnson, and former Brexit Secretary, David Davis.

Mr Blair added: “The Brexiteers, the people who believe in a different version for Britain, of which Brexit really is just the stepping stone, they haven’t won this battle either.”