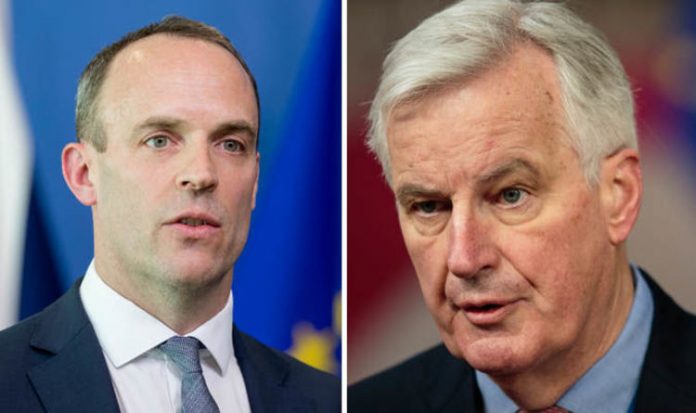 The new Brexit Secretary was making his first visit to Brussels following the resignation of David Davis, but came up against strong opposition from EU negotiators.

EurActiv news website reported the Finnish and Estonian versions of the proposal misspelt the names of Estonia and Finland.

It was a similar situation for the Polish version, which has now been unpublished from the website.

Business consultant Axel Antoni commented to The Sun about the German version, stating: “It makes any linguistic purist vomit into their coffees.

“It’s a mixture of archaic grammar and vocabulary and sloppy colloquial use of language.”

The department also incorrectly translated the term “principled Brexit” into French as “un Brexit vertueux”, which implies that the UK’s departure from the EU is virtuous or morally good.

Commenting on the errors, a Department for Exiting the EU (Dexeu) source told The Sun: “Where any errors are spotted, we will correct them as soon as possible.”

Mr Raab nevertheless remained positive about the discussions, and vowed to increase the pace of the Brexit negotiations.

He said: “I came out today to discuss the detailed proposals in our White Paper and I am looking forward to, with renewed energy, vigour and vim, looking at the details of this.

“I enjoyed meeting Michel Barnier discussing the progress we have made and the outstanding issues to resolve across the Withdrawal Agreement and the Future Framework.

“I’m looking forward to stepping up the pace and energy in our negotiations.”

However Michel Barnier, the EU’s chief Brexit negotiator, stated it was a “matter of urgency” to agree on a “backstop” plan for Northern Ireland to avoid the reimplementation of a hard border.

Mr Raab responded: “As Michel has told us, the clock is ticking, and I am looking forward to intensifying, heating up the negotiations and making sure we are in the best position to get the best deal.”

EU negotiators reportedly believe Mrs May’s agreement to a ‘common rule book’ and a degree of European Court of Justice jurisdiction does not go far enough.

One diplomat commented on the negotiations to the Telegraph, stating: “They are trying but have gained little traction.

Commenting on the ongoing deadlock surrounding the Irish border issue, they added: “We can no longer kick the can. We need to hear from Raab how he sees backstop in the Withdrawal Agreement.”

Concerns were also raised after the EU announced that they were stepping up preparations for a “no deal” Brexit.