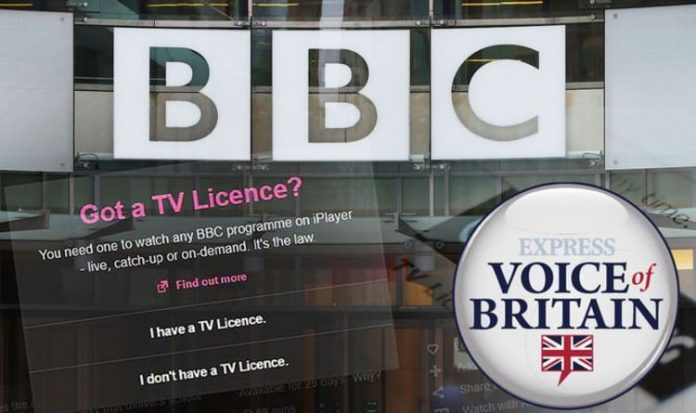 Over recent weeks, the BBC has faced backlash after scrapping free TV licences for over-75s and the decision to axe Rule, Britannia! and Land of Hope and Glory from the Last of the Night of the Proms.

A total of three million households are now forced to pay £157.50 for a colour licence and £57 for a black and white licence.

The decision by the BBC has been heavily condemned by pensioners, politicians and UK charities, who fear many over-75s will struggle to pay the charge.

The BBC has also come under fire this week for its decision to perform Rule, Britannia! and Land of Hope and Glory without lyrics at the Last Night of the Proms.

It had been reported the songs, both staples in the Proms diary, could be dropped altogether over concerns of associations with colonialism and slavery.

A poll, which ran from 10am to 7pm on August 29 on the Express.co.uk website, asked, “Do you think the BBC TV licence fee should be scrapped?”

One person said: “The TV licence should be abolished.

“It certainly should not go to one company, who can spend billions on sets, on new buildings, on staff salaries (and presumably pensions).

“The company CEO when challenged says we can move most staff out of London? Which will cost more?”

Another person added: “The TV licence is now an outdated concept, as kids we were told we needed a licence for our radios to receive the signal, that has changed to us supporting a bloated biased corporation, who now dictate our very lives.

“And to be criminalised for non-payment is nothing short of Draconian.

“The BBC needs an extremely radical overhaul from top to bottom – it is no longer fit for purpose.”

Someone else pointed out the BBC has been siding with the EU among Brexit and other issues.

They said: “They stopped being the BBC when they started taking money from the EU and siding with them over Brexit among other things.

“This tax is ridiculous in this day and age and it should be made PPV.”

Another person said: “The BBC have shown on many occasions that it doesn’t represent the people who pay for it.

“The BBC licence is out of date and why should people be forced to pay for a service that they don’t use.

“It should become a subscription service or be forced to fund itself.”

“It needs to fund itself.”

With another person simply putting it: “Long overdue get rid of the TV licence and shut down the overpaid BBC.”