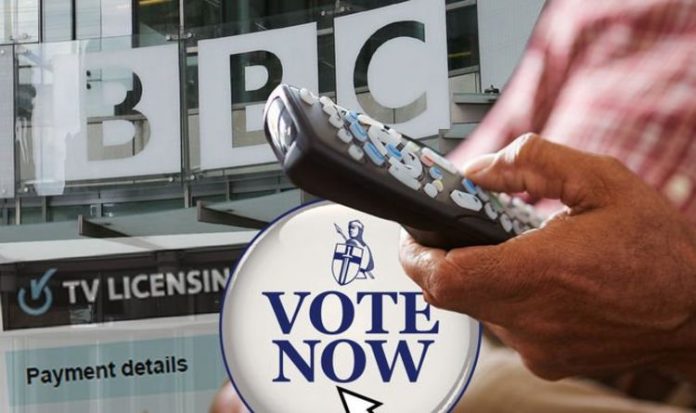 The BBC has been heavily condemned for its decision to abolish free TV licence fees for pensioners. The new ruling, which came into effect on August 1, means over-75s now have to fork out the £157.50 annual charge, unless they are in receipt of Pension Credit which exempts them from the fee.

The decision by the BBC has been heavily condemned by pensioners, politicians and UK charities, who fear many over-75s will struggle to pay the charge.

They are also concerned those who are unable to afford the fee will stop watching TV altogether, which provides a vital lifeline and source of entertainment for older people, especially those who live alone.

The BBC has also come under fire this week for its decision to perform Rule, Britannia! and Land of Hope and Glory without lyrics at the Last Night of the Proms.

It had been reported the songs, both staples in the Proms diary, could be dropped altogether over concerns of associations with colonialism and slavery.

But the BBC has confirmed the two pieces will still be performed this year, just without the lyrics.

The songs are expected to be performed as normal with their lyrics when the coronavirus pandemic is over.

The concert is due to take place on 12 September but without an audience.

Land of Hope and Glory and Rule, Britannia! will feature new orchestral versions, as well as a new arrangement of Jerusalem.

Jerusalem, another sing-along favourite, will keep its words, as will the National Anthem.

The BBC said in a statement: “With much reduced musical forces and no live audience, the Proms will curate a concert that includes familiar, patriotic elements such as Jerusalem and the National Anthem, and bring in new moments capturing the mood of this unique time, including You’ll Never Walk Alone, presenting a poignant and inclusive event for 2020.”

It added: “The Proms will reinvent the Last Night in this extraordinary year so that it respects the traditions and spirit of the event whilst adapting to very different circumstances at this moment in time.”

The Last Night of the Proms is a staple in the classical music calendar, and typically features a large live audience who sing along to some of Britain’s most popular pieces.

But due to coronavirus restrictions, the Albert Hall will be largely empty, except for a small number of musicians and singers, who will be dispersed around the venue to comply with social distancing rules.

The BBC’s outgoing director-general Lord Hall insisted the decision to perform the two patriotic anthems without lyrics was a “creative” one.

But he admitted that the issue of cutting songs because of their association with Britain’s imperial history had been discussed.

The two pieces are deemed controversial due to their reference to the former British Empire.

On Monday, Downing Street waded into the row, with a spokesman saying: “This is a decision and a matter for the organisers of the Proms and the BBC.

“But the PM previously has set out his position on like issues and has been clear that while he understands the strong emotions involved in these discussions, we need to tackle the substance of problems, not the symbols.”