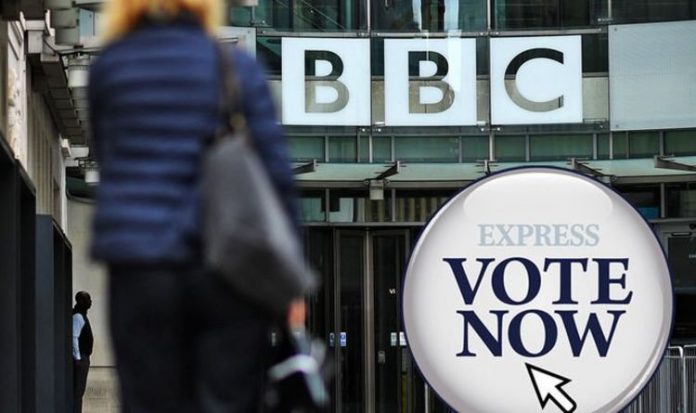 Readers can vote in our poll below. And let us know more about what you think by scrolling down and leaving a comment.

The news of the price rise prompted a strong reaction on Twitter, with journalist Dan Wootton branding it “outrageous”.

He blasted: “Pure arrogance for the Government and BBC to press ahead with a £1.50 hike to the Licence Fee in the midst of a pandemic forcing so many out of work.

The TaxPayers’ Alliance fumed: “Brits are fed up with seeing the Beeb splash their cash on loaded luvvies, politicised programming and generous expenses for BBC bosses. It’s time to scrap the licence fee and let the public decide what’s worth paying for.”

talkRADIO host Mark Dolan asked: “Why is it going up in a pandemic and an economic crisis?”

Conservative commentator Darren Grimes did not hold back as he tweeted: “The BBC is increasing the telly licence on the 1st of April, you’d think at a time of such dire economic hardship for many that even the BBC’s London-based liberals would have a little more self-awareness than that which they’re displaying here.”

People buying or renewing their TV licence after April 1 will pay the new higher fee.

Those already buying a licence on an instalment scheme which started before that date, such as via a monthly direct debit or weekly cash payments, will continue to make payments totalling £157.50 until it comes up for renewal.

The new cost equates to 43p per day, according to the BBC.

The licence fee model has come under fire recently as the broadcaster faces fierce competition from streaming services such as Netflix.

Defund the BBC is calling for non-payment of the licence fee to be decriminalised.

The campaign group, which has amassed nearly 100,000 Twitter followers since it was launched last year, also wants the annual charge to cover BBC content only.

The corporation’s new director-general Tim Davie previously insisted the licence fee was the best way of funding the broadcaster.