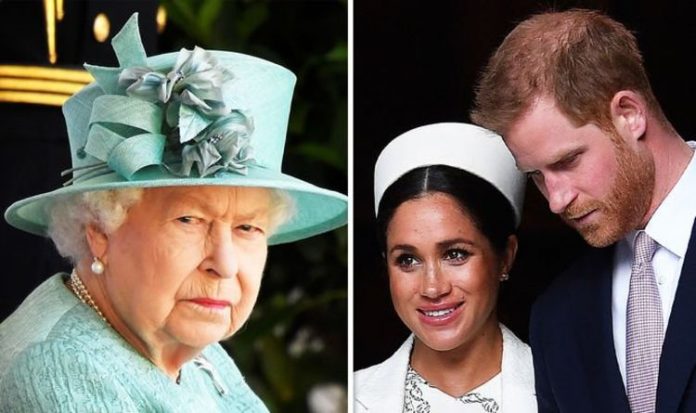 The Queen was expected to begin the 12-month review of Meghan and Harry’s royal departure, commonly known as Megxit, next month. Yet, reports allege the couple are happy enough with their current arrangement and are looking to extend the review beyond the year-long mark. Although the Duke and Duchess of Sussex dropped the bombshell news on the Royal Family last January, the Queen was exceptionally quick to react and to arrange the ‘Sandringham Summit’ with Harry, Prince Charles and Prince William.

Although an agreement for the couple’s post-royal life was rapidly arranged, biographer Sean Smith suggested that the Queen made a crucial blunder in her haste.

When looking into the monarch’s official statements on their exit, Mr Smith explained: “She did not ask the press to leave them alone, which might have set a welcome precedent for the future.”

Journalist Yasmin Alibhai-Brown also noted: “If the Queen had once said, in her way, ‘Hey, guys, this is my grandson and his wife. They just got married. Back off and let them build a life from themselves.’”

She claimed the media spotlight would have withdrawn as a result — but the Queen never explicitly asked for the couple’s privacy.

Harry’s grandmother did appear to dispel any reports of a rift between herself and the Duke of Sussex during her formal statements, which expressed her unwavering support for the rebellious pair.

In an official statement, the monarch explained: “Although we would have preferred them to remain full-time working members of the Royal Family, we respect and understand their wish to live a more independent life as a family while remaining a valued part of my family.”

Then, when negotiations had concluded, she took the unusual step of addressing the Sussexes by their first names in another formal statement.

She explained: “Harry, Meghan and Archie will always be much loved members of my family.”

She continued: “I recognise the challenges they have experienced as a result of intense scrutiny over the last two years and support their wish for a more independent life.

“I want to thank them for all their dedicated work across this country, the Commonwealth and beyond, and am particularly proud of how Meghan has so quickly become one of the family.”

Despite the warm affection apparent in these messages, Mr Smith suggested that by not encouraging the media to leave the pair alone, they were going to be under the same level of scrutiny as they had to endure when they were working royals.

He continued: “The daily update about Meghan and Harry’s life would prove to be a welcome diversion from the serious allegations surrounding Prince Andrew and his links to convicted paedophile, the late Jeffrey Epstein.”

Harry’s uncle, the Duke of York, tried to address his association with Epstein in November 2019 through a BBC Newsnight interview.

The broadcasted exchange was deemed a “car crash” and Andrew was effectively forced to step down from public duties due to the extensive backlash.

Royal spheres were still occupied by Andrew’s early retirement when, just weeks later, Meghan and Harry announced they wanted to leave the Firm.

They had just returned from an extended break in Canada when they made the shocking declaration that they wanted to become financially independent.

Harry claimed they had “no other option” due to the “powerful forces” which were affecting his wife.

As Mr Smith noted: “Harry and Meghan had already decided to opt out of the royal rota, although to be fair, it would have been better for them if there was an off switch for the anti-Meghan commentators.”

Almost a year on from their official departure, and the Sussexes have been true to their word and are no longer supported by the royal finances.

The pair have secured lucrative contracts with both Netflix and Spotify, and have laid down roots in California by buying their first home together.

Part of the Megxit deal meant the couple had to spend the majority of their time out of the UK and in North America — the Sussexes have not returned to the UK since carrying out their final royal engagements last March.