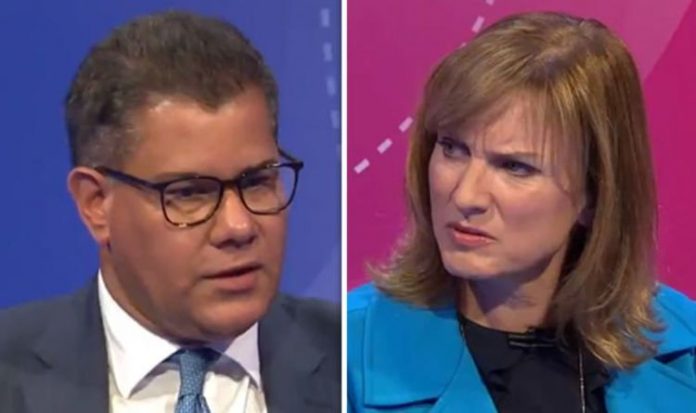 By contrast back in April that figure was nearer 50 percent.

Asked whether he thinks the rules are being followed Mr Sharma replied: “Well as we talk about test and trace there are almost half a million people who through that system have self-isolated who would otherwise have been putting others at risk.”

He added there is “a process to make sure that happens” in practice.

However the minister was unable to confirm that people who are supposed to be self-isolating are receiving check-ups as Ms Bruce cut in, asking her to let her “finish”.

Asked by Ms Bruce whether this was taking place he replied: “Let me give you an example when talking about people not necessarily following the rules.

“I come into London everyday by train and I’ve actually seen over the past few months just about everyone is observing the rule to have face coverings on public transport.

A number of Twitter users criticised Ms Bruce for ‘interrupting’ the Minister.

Pubs and restaurants have been banned from remaining open past 10pm and can only operate table service.

Those who are able to work from home are once again being urged to do so.

Britons had already been banned form socialising in groups of more than six.

Mr Sharma was asked on Question Time whether those who are being told to self-isolate are doing so in large numbers.

He replied: “I think as I said to you if you look at test and trace a significant percentage of the people who have been contacted as a result of somebody else getting the infection are indeed self-isolating.

Pushed by Ms Bruce to provide evidence the minister commented: “We know a lot more about this virus, we’ve got a whole set of measures in place, nobody wants to go into full lockdown and what we need is for people to continue to observe the rules and the guidelines.”

Thursday’s edition of Question Time took place from Chingford with questions with no studio audience due to the coronavirus pandemic.

Members of the public asked questions by video to safeguard those taking part.

However, there were reports of streets becoming packed in central London after 10pm on Thursday night when pubs and restaurants were forced to close.

Kirsty Lewis, who works in the House of Commons, posted a picture of crowded streets on Twitter.

Speaking to Express.co.uk she said: “Everyone poured onto the streets. I guess most people were probably socially distanced from other groups, just by the nature of normal distances you tend to keep. But I can imagine it was an issue as they all tried to crowd onto tubes.

“Also, I know that a lot of people were discussing going back to their houses or flats for more drinks instead, where they would have just usually stayed out in the bars or restaurants later.

“Can easily imagine how that led to extra spread.”