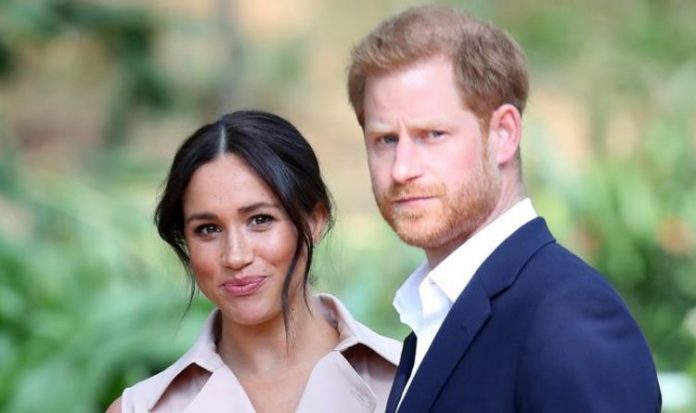 The Duke and Duchess of Sussex’s final royal tour last year cost taxpayers an eye-watering £246,000 on travel. The huge sum prompted a furious reaction on Twitter.

Another hit out: “Its very easy to spend,spend,spend when its not your own money…..”

A third fumed: “H&M knew then that there was going to be the ‘Megxit’ so they should be made to pay it back.”

Another wrote: “And those grifters dare to complain that they were treated unfairly by the Firm. What a pair.”

A fifth added: “Used as a platform to say ‘Nobody asked if I was ok’ Good riddance.”

One more branded the cost “ridiculous”, saying: “That’s just ridiculous a quarter of a million for a trip I appreciate they have a team of Security Personnel, Personal Assistants etc but 250,000 on a trip when we have homeless and poverty in the country.”

Meghan and Harry’s 10-day southern Africa tour came just months before they quit royal duties for a new life of personal and financial freedom in America.

They travelled with their then four-month-old son Archie to South Africa in September last year, with Harry also heading to Angola, Malawi and Botswana.

The flights came to nearly a quarter of a million pounds and were the most expensive royal journey of 2019-2020, according to the royal financial records.

A royal source said: “The Duke and Duchess of Sussex undertook over 20 engagements, bringing attention to a number of worthwhile causes, in particular, raising awareness of the work and the legacy of the Halo Trust.

“So, the visit, as an official visit funded by the Government, fulfilled the objectives that were set out for it and so therefore there would be no requirement or obligation on the Duke and Duchess of Sussex to make any payments in relation to that official visit.”

The trip was overshadowed by a series of controversies as ex-Suits star Meghan launched legal action against a newspaper while the tour was still under way.

READ  Tier 6: Three areas have the highest positivity rate - but will they go into Tier 6? | UK | News (Reports)

And the couple filmed an ITV documentary during the visit which saw them complain about their struggles as royals.

The Queen’s grandson and the former actress went on to share plans to step back as senior royals months later in January, plunging the monarchy into a period of crisis.

The Queen held a summit with Prince Charles, Prince William and Harry to discuss the Sussexes’ future roles.

It was later announced they would walk away from being working members of the Royal Family.

They officially ended royal duties on March 31 and are now living in the US.

The couple have bought an £11 million mansion in celebrity hotspot Santa Barbara.

Meghan and Harry have signed a lucrative deal with Netflix to make shows for the streaming service as they carve out new careers.