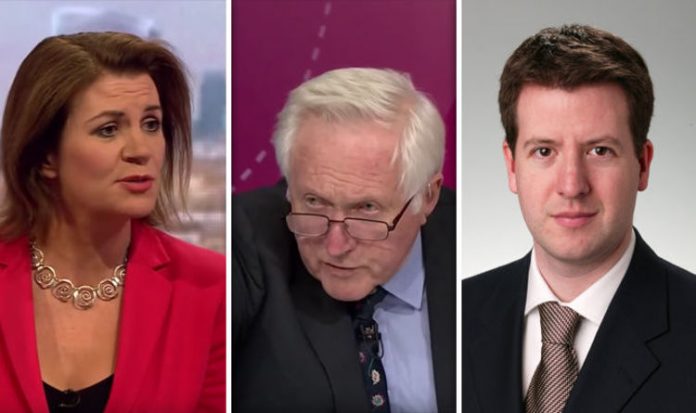 Tory MP Rory Stewart and Labour’s Chris Leslie will both be a part of the panel of five discussing the most pressing issues in Westminster this week.

Topics which may be discussed on the show this week include the rumours of a planned coup by Brexiteers to oust Theresa May as Prime Minister, the publication of the latest no-deal Brexit planning documents, the Russian Skripal poison suspects who claim to be “tourists”, and the attack on Jacob Rees-Mogg’s children outside his house in London.

Live updates from the show can be found below.

Who is Chris Leslie?

Chris Leslie is a Labour MP and a former Shadow Chancellor.

In the party’s 2007 leadership election, the politician was responsible for running Gordon Brown’s campaign.

Last weekend he lost a vote of no-confidence as hard left momentum members continue a purge of moderate party MPs.

Who is Fazia Shaheen?

Fazia Shaheen is the director of a left-wing think tank called the Centre for Labour and Social Studies (CLASS).

She has previously worked in the charity sector, holding a role at Save The Children.

She is a prospective parliamentary candidate for the Labour party.

Who is Julia Hartley-Brewer?

Julia Hartley-Brewer is a right-wing political commentator who currently has a show on talkRADIO.

She was previously the political editor of the Sunday Express.

She is a regular guest on the flagship BBC debate show.

Who is Rory Stewart?

Rory Stewart is a Conservative MP and currently holds the brief as Prisons Minister.

He made headlines in August when he promised during a live interview to quite his role if the state of prisons had not improved in 12 months time.

He was a tutor to Princes William and Harry.

Who is Theo Paphitis?

Theo Paphitis is an entrepreneur and businessman.

He has been a Dragon on the popular BBC show Dragons’ Den, for the last eight years.