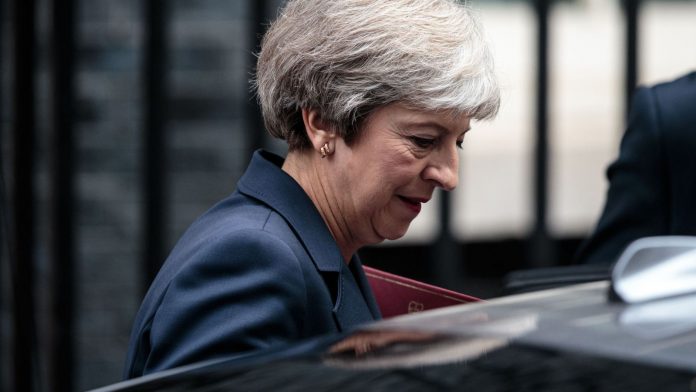 Theresa May should leave office once she has agreed a Brexit deal with Brussels and steered it through parliament, according to her former policy chief.

George Freeman said it was his view that the prime minister must “seal the deal for a new generation and hand the torch to them”.

When asked about Mrs May’s future, the Mid Norfolk MP told a London event hosted by The Times: “Let’s get the withdrawal agreement over the line…let’s leave the decision about the end state to be negotiated by Theresa May’s successor.”

The remarks come amid a febrile atmosphere at Westminster over Mrs May’s leadership, with dozens of her MPs said to be plotting her downfall because of their opposition to her Chequers plan for Brexit.

The likes of former foreign secretary Boris Johnson, Environment Secretary Michael Gove and Home Secretary Sajid Javid are expected to be among the runners and riders whenever the PM leaves Downing Street.

1/2. Can we make Brexit a moment of more inspiring National Renewal for a New Generation? Great to debate with @Jacob_Rees_Mogg with a packed house at @MyTimesPlus tonight on the need for the ERG to focus on supporting the PM in delivering the Withdrawal Agreement for Brexit… pic.twitter.com/Dgo56Izs6s

But Mr Freeman’s reference to the “new generation” makes clear that he wants a fresh face to take the reins and reinvigorate the party.

Many of the Conservative malcontents are members of the European Research Group, a eurosceptic group of backbench MPs who have been steadfast in their calls for the PM to “chuck Chequers”.

A gathering of the ERG on Tuesday was characterised as an “open revolt” against Mrs May, but senior Brexiteers have moved to play down claims of a coordinated coup to turf out the PM.

And speaking at the same event as Mr Freeman, ERG chairman Jacob Rees-Mogg reiterated his support for Mrs May, telling the audience his party should “hang on” to the PM.

Britain is currently in negotiations with the European Union over the terms of its exit ahead of the March 2019 departure date.

Both sides hope to agree a deal by the start of November – with this deadline seen as allowing enough time to get the withdrawal agreement through the European and British parliaments.