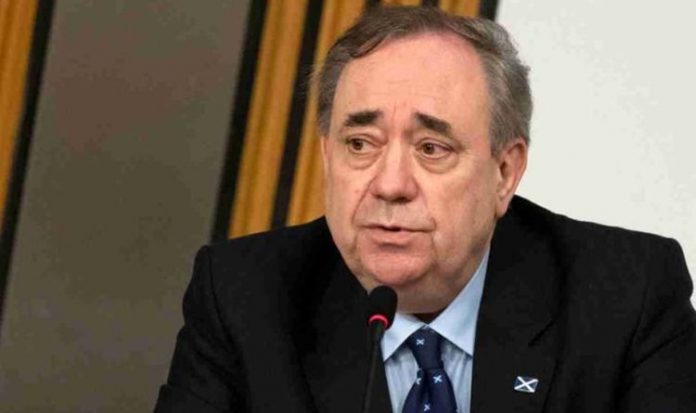 BBC News’ Scotland editor Sarah Smith announced on yesterday’s 6 o’clock news that Mr Salmond said Ms Sturgeon had “broken the ministerial code and that he thinks she should resign”. Ms Smith then went on Twitter to correct her error. She tweeted: “I would like to clarify that Mr Salmond did not say that the First Minister should resign.”

She added in another tweet: “He said ‘I’ve got no doubt that Nicola has broken the ministerial code but it’s not for me to suggest what the consequences should be’.”

Mr Salmond added that a crucial meeting between himself and Ms Sturgeon had been “written out of history”.

He said this meeting has been overlooked because it may have harmed her defence against a rule breach.

Mr Salmond said it was not for him to suggest whether Ms Sturgeon should step down now or not.

He said it was not up to him to “suggest what the consequences should be”.

A BBC spokesperson also released an official statement to correct the broadcaster’s error.

The statement read: “On the 6 O’Clock News headline last night we said Alex Salmond had claimed the First Minister had ‘broken the ministerial code and that he thinks she should resign’.

“We would like to clarify that Mr Salmond did not say that the First Minister should resign.

“He said, ‘I’ve got no doubt that Nicola has broken the ministerial code but it’s not for me to suggest what the consequences should be’.”

Ms Sturgeon has had to defend herself against claims she broke conduct rules by failing to record a summit with Mr Salmond at her home in 2018.

Ms Sturgeon had told parliament in 2019 that she had thought the meeting was about SNP party business.

She then said that it was only on speaking to Mr Salmond that she discovered it was in fact about complaints.

This particular alleged breach is one of the issues on which Ms Sturgeon has been said to have broken the ministerial code.

Mr Salmond has said that Ms Sturgeon knew about the arranged meeting four days before it took place.

However, now Ms Sturgeon claims she has “forgot” about the March 29 meeting.

Although, she has also said that this meeting was when she first learned about complaints against Mr Salmond.