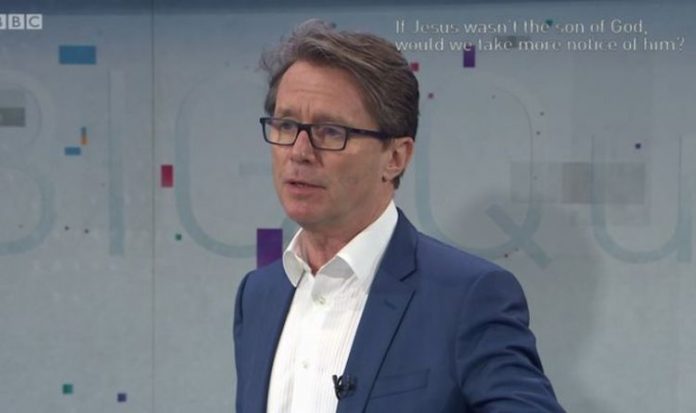 Nicky Campbell started a discussion this morning’s The Big Questions based on: “If Jesus wasn’t the son of God, would we take more notice of what he said?” Introducing the question, Mr Campbell said: “2021 is a census year here in the UK and it’s planned to still go ahead online on March 21st.

“Now, one of the area’s probed is a religious belief and 10 years ago, 59.3 percent of those who chose to answer the question identified as Christians.

“Now this year, it’s expected the numbers will fall below 50 percent because far more of the elderly follow a faith than young people.

“But although younger people may not belong to a form of religion, the key messages of Jesus, love, acceptance and forgiveness are still highly relevant today.”

Mr Campbell asked Louise Davies, Director of Christians on the Left, a socialist society about whether Jesus was the Son of God and the origins of the Gospels?

Ms Davies said: “I think the danger of taking the son of God out of the argument is that we have to morally work our way to the presence of God.

“If we are a good person, then we can earn that but that is not the Christian message.

“The Christian message is that we accept Jesus as our Lord and Saviour and at that moment we are in Communion with God.

“They walked with Jesus, they saw the miracles, saw the teaching.”

But in a stark throwback, Mr Campbell hit out at Ms Davies and said: “No, it wasn’t written by people who were there with Jesus.

“It wasn’t, according to most biblical scholars.”

“I am surprised when people claim these were eyewitness accounts.”