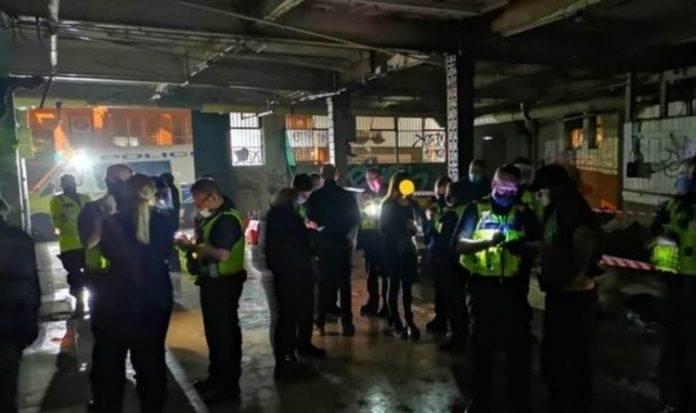 Violence flared when officers stormed the party in the Digbeth area of Birmingham at around 9pm last night. A 36-year-old man was arrested on suspicion of assault during the raid and has since been released under investigation. Police seized DJ equipment, class A drugs and a knuckleduster and said they were now reviewing all footage from the illegal gathering.

A spokesman said officers believed they had identified the organisers and were now looking at pursuing further action.

Organising an illegal gathering carries a fine of £10,000 under coronavirus laws.

West Midlands Police Chief Superintendent Andy Beard said: “This was not only illegal but extremely dangerous for both those who attended and officers.”

He continued: “It’s extremely disappointing that some are still not grasping that such events only increase the risk of spreading a deadly virus.

“We’re currently under national restrictions and the region will then go into the highest tier due to the number of COVID cases next week.

“It’s unacceptable when people recklessly ignore the rules and put themselves and others at risk of catching the disease.

“It’s also unacceptable that officers should be attacked while going about their duties.

“We’ve seized equipment, drugs and a weapon and we’ll be looking to ensure there will be no repeat again.”

The violent scenes in Birmingham followed a day of disturbances in central London where 155 people were detained during chaotic anti-lockdown protests.

Scotland Yard said arrests were made for offences including breaching coronavirus regulations, assaulting a police officer and possession of drugs.

Hundreds of demonstrators marched from Hyde Park to Oxford Circus and Regent Street and clashes broke out when police arrived to disperse the crowds.

Home Secretary Priti Patel earlier said: “We’ve seen our police officers yet again do incredible work to ensure that they help to stop the spread of this awful virus.

“The people that are protesting have been protesting for many months, and we’ve seen this over successive weekends.

“We ask everybody to be conscientious – we all know the regulations and the guidance, we have brought these measures in to save lives and to prevent preventable deaths.”