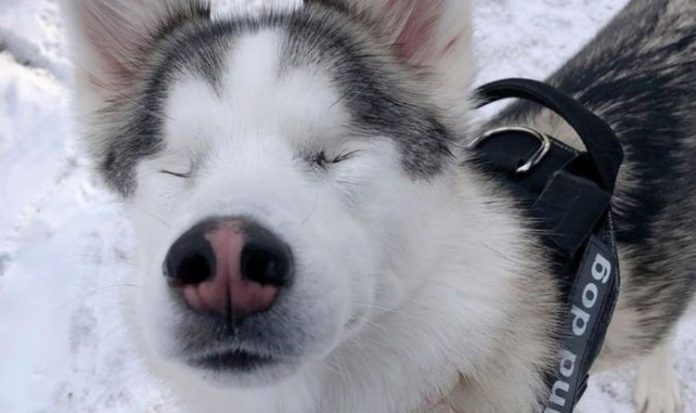 Mackenzie is a lively husky but unlike most dogs she is completely blind. She lost her eyesight in April 2020 when she was just a puppy. Initially she was blind in just one eye due to glaucoma but a month later she woke up unable to see out of her left eye. Mackenzie had to have an operation to remove her eyes. But the blindness hasn’t stopped this determined pup from living life to the fullest.

Owner Mandy Leung wrote on Instagram: “Learning to adapt at such a young age has made her into a very confident girl.”

She added: “She gets around new places just fine and can play fetch like a normal dog! I even forget she is blind sometimes because she stares right into my eyes when she looks at me.”

It’s clear from the photos and videos posted on social media that Mackenzie has taken blindness in her stride – she loves going on long walks and playing ball.

Mandy Leung told The Dodo: “She is the most friendly pup and has never met anyone she doesn’t like.”

She added: “Snow is one of her favourite things and she never wants to come inside if there is snow outside.”

In the heart-warming video Mackenzie can be seen running around the garden in circles excited by the snow.

Huskies have a thick fur coat and bushy fox-like tail to keep them warm. They also have furry paws to help them walk in the snow.

Whilst Mackenzie might not be able to see the snow it’s clear she loves playing in it. If only it could be snowing all year round.