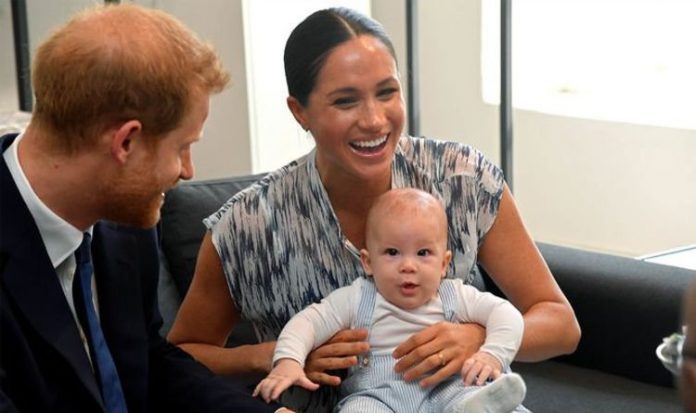 Meghan and Prince Harry shared their happy news yesterday evening by issuing a brief statement and a picture. In the snap, the Duchess of Sussex donned a floor-length Carolina Herrera dress.

This floaty and comfortable gown had been made by the Venezuelan-American label two years ago, when she was pregnant with Archie.

Meghan never wore in public the lightly coloured dress she is wearing in the picture shared on Valentine’s Day.

But she donned another bespoke Herrera pieces she had got for Archie’s pregnancy during her second-last royal visit outside the UK’s borders.

In late February 2019, Meghan and Harry travelled to Morocco, a visit carried out at the request of the British Government.

There, the Duke and Duchess had the chance to champion causes close to their heart, including universal education opportunities for women.

During her final joint engagement in the country with Harry, Meghan wore a lavender floral gown by Herrera.

Harry and Meghan’s firstborn was front and centre also in the statement the couple released.

Rather than focusing the announcement on themselves or the royal baby to come, the Duke and Duchess of Sussex spoke about the arrival of a sibling for Archie.

The statement shared by a spokesperson for the Sussexes read: “We can confirm that Archie is going to be a big brother.

The picture released alongside the announcement was taken by Misan Harriman, the first Black photographer to shoot a cover of British Vogue, remotely with an iPad.

In the snap, Meghan and Prince Harry smile at one another while laying down under a tree – most likely in the garden of their home in Montecito.

Mr Harriman paid tribute to the couple following their announcement by sharing a personal tweet, saying: “Meg, I was there at your wedding to witness this love story begin, and my friend, I am honoured to capture it grow.

Meghan and Harry shared news of the Duchess’ pregnancy with the Royal Family “shortly” before letting the public know, according to ITV’s royal editor Chris Ship.

He wrote on Twitter: “The family were told shortly before the announcement was made public”.

While the royals were informed of the happy news, one expert claimed Meghan and Harry did not let courtiers know when they would tell the public, leaving Buckingham Palace aides “off guard”.

Royal commentator Emily Andrews wrote on Twitter: “The Sussexes had apparently told the Royal Family their happy news, but not, it seems, that they would announce it.

“Tonight’s announcement caught officials off guard, with no prepared statements.”

However, the Mail on Sunday royal expert added, “everyone” in the Royal Family is delighted there will soon be a new addition to the family.

She said: “But everyone is ‘delighted’ including the Queen, Prince Philip and Prince of Wales.”