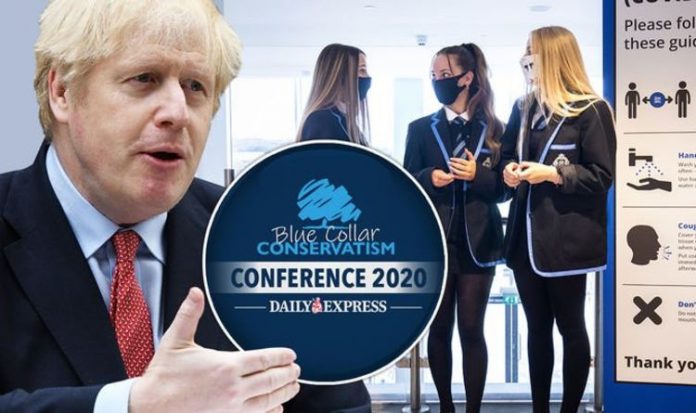 An overwhelming 96 percent (4,170) people called on the Government to stop pushing young people towards university and instead focus on training them for the jobs market. This was in comparison to just 4 percent (166) of 4,361 people who disagreed.

Meanwhile, 89 percent (4,178) of Express.co.uk readers said it was wrong that discussing the problems faced by white working class youth has become a taboo subject.

This was in comparison to just 11 percent (495) who said it wasn’t wrong when 4,992 people were quizzed on the issue.

The results come after the Daily Express teamed up with Blue Collar Conservatism Movement to bring our readers the best grassroots political debate and opinion from around the UK.

What do YOU want to ask the Home Secretary? Email your question to [email protected]

During the debate, Tory MP Esther McVey, who is spearheading the five day conference, hit out at “snobbish” attempts to push younger generations into attending university instead of providing them with alternatives.

School children are often pushed into attending going down the traditional academic route – A-levels followed by a degree – rather than other routes into careers such as apprenticeships.

Express.co.uk readers also appeared to agree with Ms McVey with comments reflecting the results of the poll.

One said: “The problem is that so many university degrees are in Mickey Mouse subjects that are of little or no use to an employer.

“Universities should stick to offering a core of worthwhile degrees such as science, engineering and medicine. Having a degree doesn’t always mean you’ll get a decent job and earn loads of money.”

Another said: “Young people need to be steered to whatever they have the ability to succeed in. For some that’s uni, for others that’s a more practical way of learning – an apprenticeship or other vocational training. For a few it’s a future in the nearest McDonald’s.

READ MORE: POLL: Would you be willing to spend more to buy British products?

Speaking on the first day of the Blue Collar Conservatism Conference in Mansfield, Ms McVey said: “I think we’ve forgotten that as a society. It was just, ‘go to university,’ which was wrong and has put us on the wrong track for a long period of time.

“With that, let’s be honest, there’s been snobbery, ‘you’re good if you do this and not if you do that’.”

Meanwhile, Express.co.uk readers also hit out, with the majority saying it is wrong that discussing the problems faced by white working class youth has become a taboo subject.

Prime Minister Boris Johnson has vowed to investigate why white working class children fall behind in school and are more disadvantaged than their peers.

Tune in to Express.co.uk at 6.30pm tonight for the big Blue Collar Conservatism debate.