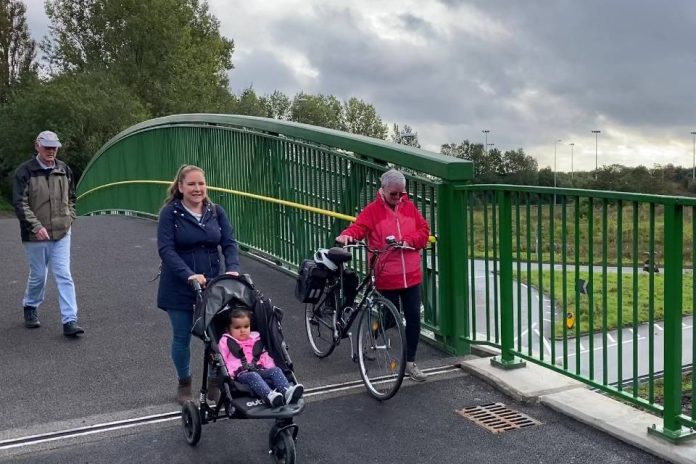 Highways England has completed work to install the 30-metre-long bridge over the A577 slip road at Orrell Interchange, where the M6 connects to the M58.

A previous bridge at the same location, which links Pemberton to the east of the M6 with Orrell to the west, had to be removed after it was struck by a lorry.

The new footbridge has a higher barrier on both sides, making it suitable for cyclists, and a new ramp provides step-free access over the slip road for people with prams and wheelchairs.

Nic Winstanley lives on the Pemberton side of the M6 with her two-year-old daughter. She said:

I’m both a runner and a pram pusher so the bridge is fab for cutting out the busy motorway junction.

It’s a much prettier and safer route for my daughter who loves watching what’s going on around her when she’s in her buggy. The footbridge adds a nice scenic route between my house and friends and family that live in Orrell. It’s also a welcome return to a route off the busy roads that my running group have missed.

Ann Miller lives on the other side of the M6 in Orrell, and uses the footbridge on her way to work in Wigan. She said:

The new bridge has brought the two areas back together and we’re really pleased to have it!

Both my husband and I cycle to work and we’re now able to use the footbridge to get to the cycle path in Pemberton, rather than having to go the long way round and cross the motorway junction. It’s also great for being able to pop to the shops in Pemberton.

Highways England’s contractors worked through the night last month to install the new footbridge, which was brought onto the site on the back of a truck and lifted into place using a crane.

You can watch a timelapse video of the bridge lift on You Tube.

Gary Knowles, Highways England’s head of scheme delivery in the North West, said: “The M6 plays a vital role in connecting the country, and we’re pleased we’ve been able to reconnect the communities that live on either side of it as well.

We needed to remove the old bridge after it was badly damaged by a lorry, but we’ve been able to replace it with something even better. The new ramp means it’s suitable for the whole community and we’re delighted to see the footbridge is already proving popular.

AE Yates was Highways England’s main contractor for the project, and Wigan Council also arranged for maintenance work to be carried out on the paths leading to the footbridge.

I am delighted to see Highways England complete the work on the A577 footbridge which should play a fantastic role in reconnecting communities in the borough.

The new and improved bridge will not only give those living in surrounding neighbourhoods an extra incentive to choose more active travel options through walking and cycling, but it provides many parents with greater assurances for their children who may be making their way to and from schools and colleges in the locality.

Highways England’s contractors have scattered hundreds on wildflower seeds on land by the footbridge, and new trees will be planted in the autumn between the bridge and nearby homes.