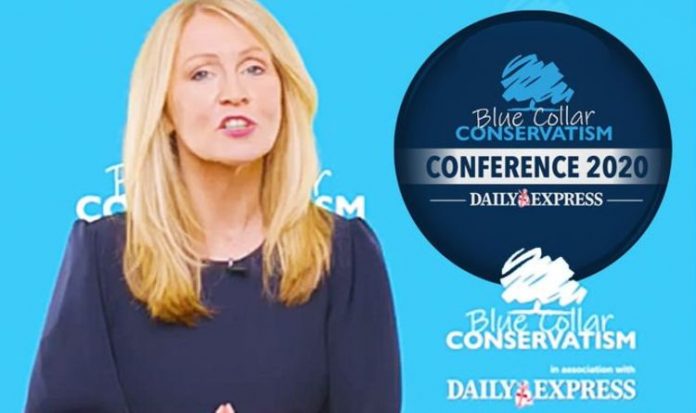 For the next five days we’ll be covering the Tory group’s conference giving voices to ordinary voters in the former Labour red wall seats and beyond. Added to that a list of top ministers including Chancellor Rishi Sunak, Home Secretary Priti Patel, education secretary Gavin Williamson, transport secretary Grant Shapps and Cabinet Office minister Michael Gove will be responding to people’s concerns.

The conference came about on the back of the political revolution last December when hundreds of thousands of former Labour diehard voters switched to the Conservative Party led by Boris Johnson.

It saw former safe Labour seats known as “the red wall” turn blue overnight while many others became marginals as Boris Johnson’s popular appeal against Jeremy Corbyn swept the country to give him an 81 seat majority.

The Daily Express has partnered with the Blue Collar Movement to help produce its first virtual conference aimed at getting the views of grassroots voters in the new Conservative seats.

With Ms McVey’s production team we’ll be travelling across Britain to hear what real people think of the key issues affecting their lives.

Ms McVey said: “This is the start of doing the traditional party conferences in a very different way. It is a Party Political Conference first. Travelling the country reaching out and speaking to the public and then getting Cabinet Ministers to reply.”

Daily Express Group Editor Gary Jones said: “The Express is proud to partner with Esther and the Blue Collar Conservative Movement to give our readers the chance to have their say on what really matters to them.

“The Express and Blue Collar Conservative Movement share many of the same values in having pride in our country and what we can collectively achieve.

“We very much support the need for fairness and levelling up in our society with all given the opportunity to succeed.

“All too often the silent majority don’t get the chance to voice their concerns and ambitions for the future. Well, now they can.

“Please do let us know what you think about the issues we’re facing today.”

Starting on Monday we’ll be in the North East to hear from voters about transport and economic development.

The roving conference will then move on to the East Midlands where hard-pressed taxpayers will be able to share their thoughts on education, immigration and culture.

READ MORE: We’re failing our poor kids – we MUST give them HOPE says SHAUN BAILEY

In Birmingham we’ll be debating housing and planning with local experts, in Yorkshire crime and in the North West the focus will be on business and the economy.

We’ll be there filming every second in Sedgefield, Mansfield, Keighley too – and other key marginal seats across the midlands and the north of England.

With Brexit looming and coronavirus crippling the country’s economy the debate should be both fascinating and lively and you can watch all the action as it unfolds on our website, Express.co.uk.

At the end of each day we’ll be holding a live Q&A with MPs – which will be streamed in real-time on this website and on our facebook page – where you can ask questions about what you’ve seen.

There will also be live polls on the Express website, giving you the chance to vote and comment on the key issues raised each day.

To read the very latest stories from the conference, watch the best videos and join in simply regularly check this website throughout the week and buy your copy of the Daily Express.

Get involved with the discussion by emailing [email protected] or use #bcc20 on social media.