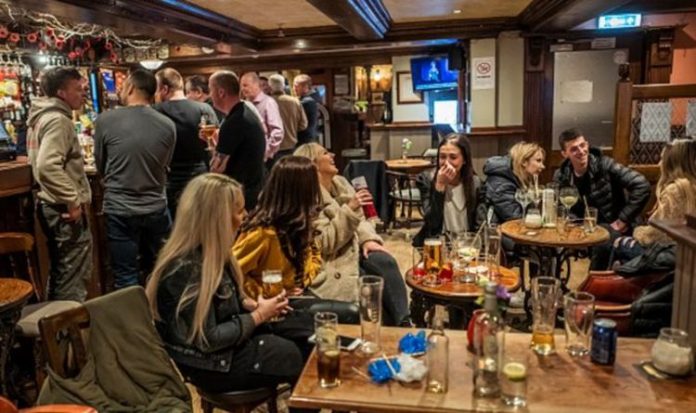 Speaking on TalkRADIO, the Tory MP claimed to have been told that one of the causes of a recent spike in coronavirus cases in Bolton that led to new lockdown restrictions being imposed by Matt Hancock, was the return of a holidaymaker from Spain. Mr Green claimed the holidaymaker failed to quarantine upon his return and went on a pub crawl. He suggested, however, this was not the only reason behind the spike.

He said: “The only suggestion I’ve heard so far to what’s happened in Bolton is that someone who had been on holiday in Spain, came back, didn’t go into quarantine.

“He had coronavirus and went on a pub crawl.

“That’s so far the only explanation of a contributing factor in Bolton.

“But I’m not sure that’s the whole story.

“I think there’s far more than that and the source of these figures in Bolton needs to be found as soon as possible.”

Councils with high coronavirus infection rates should be given charge of their own test and trace efforts, Greater Manchester Mayor Andy Burnham has argued.

Mr Burnham appealed for the powers on Wednesday following a U-turn by Health Secretary Matt Hancock on a decision to lift local lockdown restrictions in Bolton and Trafford on the same day the changes were due to be made.

Council leaders in both boroughs had pleaded for the ban on two households mixing to be maintained but regional chiefs woke up thinking the restrictions had been lifted overnight, as was the case with previous Government lockdown changes.

But the Department of Health and Social Care (DHSC) insisted the alterations were not due to take place until midday.

Mr Hancock said he took “swift and decisive” action in respect of Bolton and Trafford but Labour’s Mr Burnham said the Government had been guilty of a “Whitehall knows best” attitude.

The Labour politician said power to run test and trace programmes should be handed to Greater Manchester councils so a “more sophisticated, targeted approach” could be taken.

Speaking to BBC Radio 4’s PM programme, Mr Burnham said: “Throughout this crisis, we’ve had a ‘Whitehall knows best’ mentality at play and it continues.

“It really isn’t good enough when the front line is very much with us now – we need to be empowered to take the decisions to protect our communities rather than constantly waiting for Government to get its act together.

“I’m very clear about what we need: local control of test and trace with door-to-door teams – in Oldham, that is what got their numbers down and that is what we need across all of Greater Manchester.

“We need financial support for people to self-isolate, particularly people on low wages or who are self-employed – that is critical because we are just not seeing people comply with the national test and trace system.”

The former Health Secretary called on ministers to produce an “exit strategy” for local lockdowns and said the region needed to move away from “blanket regulations” when trying to tackle the virus.

Mr Hancock said a “sharp increase” in COVID-19 cases in Bolton and Trafford over the past few days led to the sudden decision not to lift the local restrictions in those areas.

Bolton and Trafford had been set to join other parts of northern England in resuming social gatherings in two households for the first time in weeks, along with Stockport, Burnley, Hyndburn and parts of Bradford, Calderdale and Kirklees.

But a statement was released by DHSC shortly after midday on Wednesday, the point at which it said the restrictions had been due to be lifted in the two Greater Manchester boroughs, confirming lockdowns would persist in the areas.