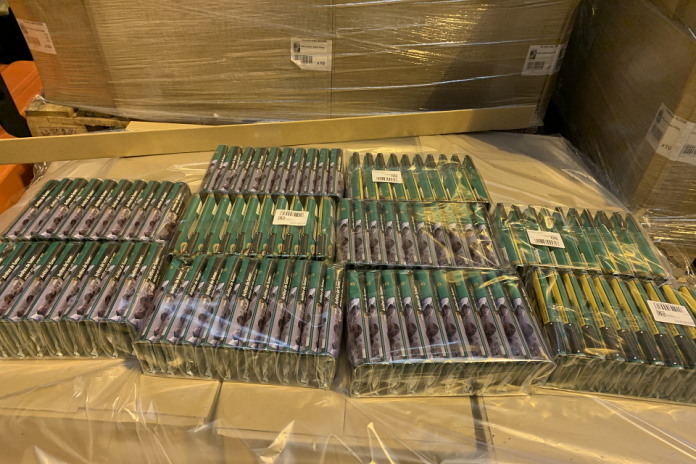 The tobacco was detected within a shipping container which had arrived at Belfast Docks from the Netherlands on Wednesday 11 November. Border Force Officers searched the shipment, which was labelled as air filters, and found the tobacco on nine pallets which weighed a total of 2.34 tonnes.

The operation was conducted under the umbrella of the Northern Ireland Organised Crime Task Force, which includes Border Force, HM Revenue and Customs (HMRC), Police Service of Northern Ireland and other partners.

This was an outstanding seizure by Border Force, whose efforts have prevented a significant amount of illegal tobacco from reaching our streets and cheating the taxpayer out of hundreds of thousands of pounds which can fund our children’s schooling and the NHS.

This is not a victimless crime and is often linked with other criminality. Children and young people are key targets for those who peddle illegal tobacco, encouraging them to take up smoking and exposing them to crime.

The sale of illegal tobacco will not be tolerated by us or our partner agencies. Disrupting criminal trade is at the heart of our strategy to clampdown on the illicit tobacco market, which costs the UK around £1.9 billion a year. This is theft from the taxpayer and undermines legitimate traders.

We encourage anyone with information about the illegal sale of tobacco to report it online or call the Fraud Hotline on 0800 788 887.

Had the smuggling attempt not been detected, it would have cost the Treasury £700,000 in unpaid duty and VAT. No arrests were made but HMRC is investigating further.

Last month, Border Force had further success in stopping illicit cigarettes entering the UK when they seized around 10 million cigarettes at Harwich worth almost £3 million in unpaid duty.

Border Force officers use hi-tech search equipment to combat immigration crime and detect banned and restricted goods that smugglers attempt to bring into the UK.

In 2019, Border Force protected the Treasury from losing more than £210 million in unpaid duty from black market cigarettes.