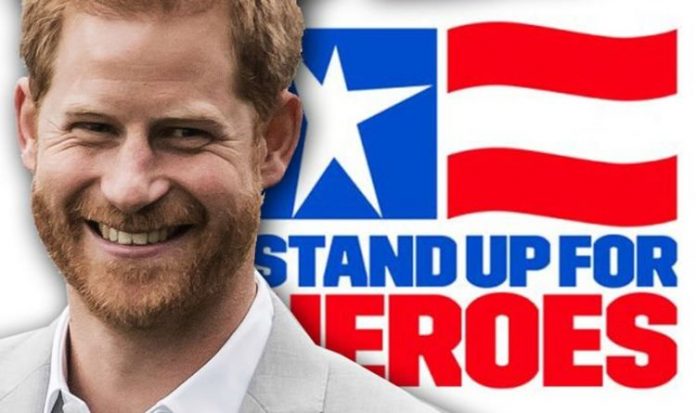 The Duke of Sussex is joining the likes of Sheryl Crow, Tiffany Haddish, Bruce Springsteen, Jon Stewart and many more for the annual comedy festival. The charity event will air tomorrow.

In a short clip posted on Twitter, Prince Harry said he is “really pleased” to join the event.

He said: “I’m really pleased to be part of tonight’s gathering.”

Stand Up for Heroes is an annual benefit concert/comedy festival which started in 2007.

Prince Harry is proud of his army background (Image: Getty)

It was established by ABC News correspondent Bob Woodruff after he suffered head injuries in 2006 while covering the war in Iraq.

The ‘Stand Up for Heroes’ event will run online on November 18 at 9pm eastern time in the US, which is 2am UK time.

The organisers of the event call it an “annual night of hope, healing, and laughter, featuring a star-studded lineup and inspirational veteran stories”.

READ MORE: Prince Harry urged to ‘stand up to Netflix’ over The Crown ‘ridicule’

Prince Harry has been a long supporter of the armed forces after serving in the British Army for more than 10 years.

Harry first served in Afghanistan in 2008, but his tour was scuppered when the media blackout on his position was broken.

He also founded the Invictus Games which aims to “use the power of sport to inspire recovery, support rehabilitation and generate a wider understanding and respect for wounded, injured and sick servicemen and women.”

Last week, the Duke and Duchess of Sussex were accused of “staging” Remembrance Day photographs.

DON’T MISS
Meghan and Harry warning: Sussexes made ‘terrible error’ with Netflix [REVEAL]
Meghan and Harry ‘made it about themselves’ on Remembrance Day [COMMENT]
Prince Harry blasted for ‘banking Netflix cash’ after The Crown  [INSIGHT]

After laying a wreath, they said they wanted to “personally recognise” the day in their own way.

However, Twitter trolls accused the couple of staging the pictures saying their demands for a private life contradicted the release of the photographs.

This came after Prince Harry’s request to lay a wreath at the Cenotaph in London was refused.

Wreaths were laid on behalf of Queen Elizabeth II, the Duke of Edinburgh, Prince Charles, Prince William, Prince Edward, Princess Anne and the Duke of Kent.

It is believed the Duke of Sussex asked for a wreath to be laid but his request was denied by Buckingham Palace on the grounds he is no longer a senior member of the Royal Family.

The Sussexes were also accused of only wearing face masks for optics following the release of the pictures.

In LA – where the couple are now living – face masks are required both indoors and outdoors in a bid to stop the spread of the deadly coronavirus pandemic.

But many pointed out, the photographs show the couple both with and without a face mask on.

Meghan and Harry shocked the world earlier this year when they announced they were stepping down as senior members of the Royal Family.