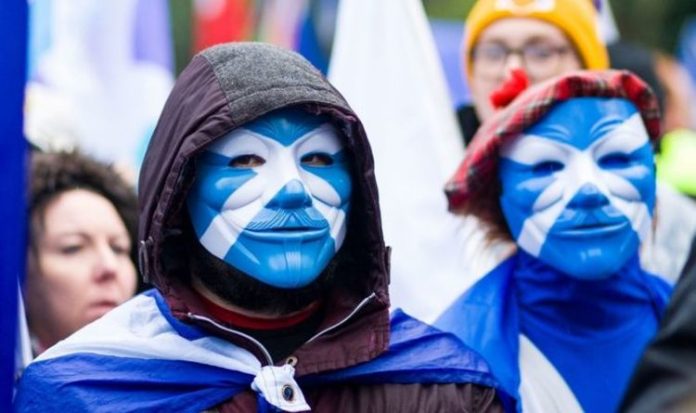 The report, based on separate polls in Scotland, Northern Ireland, England and Wales, was released as Nicola Sturgeon’s SNP unveiled a “Roadmap to Referendum” and vowed to press ahead with a vote of its own if Boris Johnson refuses to grant one himself.

The survey for the Times found a LucidTalk poll in Northern Ireland revealed a majority of 51 percent to 44 percent wanted a referendum about the border within the next five years.

It showed unionists held only a slender lead over supporters of a united Ireland with the figures suggesting a 47 percent to 42 percent split.

But it found another 11 percent remained undecided – a high enough figure to threaten the future of the UK.

It also found 48 percent of Northern Irish voters think there will be a united Ireland within 10 years.

The Scottish poll, conducted by Panelbase, suggested the SNP was on course for a huge landslide in the Scottish parliament elections in May.

Scots voted 55-45 percent against independence in a referendum in 2014 but Brexit and the Government’s handling of the Covid-19 crisis have bolstered support for the SNP, with most polls showing a majority now favour breaking away.

Her Constitution Secretary Mike Russell said: “If Scotland votes for a legal referendum on May 6 this year, that is what it will get.

“The SNP Scottish Government will deliver such a referendum if re-elected and the proposals I am putting forward make that very clear.”

Insiders said Mr Johnson would reject the SNP’s demands and take a tough line with Holyrood.

But the SNP leaders how vowed to press on with a referendum regardless and effectively invite the Prime Minister to challenge the will of the Scottish people in court.

The UK Government said the issue of Scottish independence had been settled “decisively” in 2014.

A spokeswoman said: “People in Scotland want to see politicians across the UK working in partnership to focus on defeating coronavirus.

“That remains the top priority of the UK Government, which has supported jobs and businesses across all four nations throughout the pandemic.

“The Government is supporting the devolved administrations in their vaccination programmes, with the British Armed Forces helping to establish 80 new Covid-19 vaccine centres in Scotland.

“The question of Scottish independence was settled decisively in 2014, when Scotland voted to remain part of the UK.

“Now more than ever, we should be pulling together to strengthen our United Kingdom, instead of trying to separate it.”