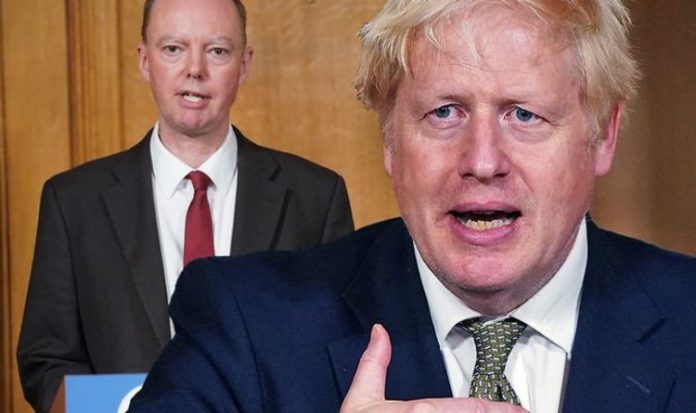 The Prime Minister, while resisting pressure for a full national “circuit breaker” shut down of businesses, is pondering sweeping restrictions in areas with soaring infection rates to try to curb the second wave of the disease. Tory MPs expect him to order the closure of hospitality businesses and ban household mixing in many parts of the country.

One well-connected Tory insider said: “Number 10 doesn’t like the idea of a blanket national lockdown but is planning targeted regional measures that would be pretty close to the circuit breaker idea.”

The move is likely to come in during the week starting on Monday 26 October when most English schools are on their half-term break but could be extended by up to a fortnight.

A Tory MP added: “It feels like a big clampdown is on the way and half term is the obvious time to do it.”

A Downing Street source said: “We are not ruling anything out. We haven’t taken a circuit breaker off the table. There are various ways of doing it.

“It would not be responsible to rule out any action to tackle the virus.”

News of the discussions comes after it emerged that scientific advisers proposed a two-week “circuit breaker” shut down last month but the idea was rejected by the Prime Minister.

And Sir Keir Starmer tonight abandoned his previous cross-party support for the Government’s effort against the disease to demand a “circuit breaker” lockdown of up to three weeks.

Schools would be allowed to remain open under the so-called circuit break of up to three weeks but all other organisations and businesses should be forced to close their doors unless their work is essential, the Labour leader said.

Boris Johnson is considering a circuit breaker lockdown to coincide with the school half term (Image: No10)

Boris Johnson has not ruled out a fresh lockdown (Image: PA)

Sir Keir refused to put a figure on how much damage the plan would do to the economy but insisted failing to act would have a worse impact.

He said the shutdown would last no longer than three weeks and claimed that would be enough time to bring down the “R” reproduction rate of the disease.

The Labour leader admitted it would “require significant sacrifices across the country” as households were banned from mixing and only essential travel allowed.

He said: “We are all concerned about any damage to the economy, but the prolonged agony of the tiered approach – which will have to be ramped up and ramped up over the weeks to come because it’s not going to work – will be far worse for the economy than the circuit break which we are proposing of two to three weeks, which will bring the R rate down and actually mean we could ease the restrictions more quickly.”

Sir Keir called for the drastic measure to be introduced “imminently” so it coincides with the half-term break for schools to minimise disruption.

“It would mean only essential work and travel. That everyone who can work from home should do so. Non-essential offices should be closed.

“Household mixing should be restricted to one household except for those who’ve formed support bubbles.

“And all pubs, bars and restaurants would be closed for two to three weeks – but compensated so that no business loses out because of the sacrifices we all have to make. It should also mean that the UK Parliament moves to remote working.”

“You know that a circuit-break is needed now to get this virus under control.

“You can’t keep delaying this and come back to the House of Commons every few weeks with another plan that won’t work.”

DON’T MISS:
Coronavirus in my area: How many people have coronavirus near me? [INSIGHT]
Coronavirus defeated: Study shows UVC light destroys 99.9% of virus [LATEST]
I have been bored at home, says VANESSA FELTZ [COMMENT]

Senior Tory MP Sir Bernard Jenkin said the local advice in his Harwich and North Essex constituency was that a “short, sharp, shock” would be the best way of tackling the pandemic.

The chairman of the Commons’ powerful Liaison Committee told Times Radio: “If we nipped it hard now, we would be well back to manageable levels before Christmas. If we leave it for another five or six weeks, then… the tail of the bell curve goes well into January.”

Mr Johnson today told a Cabinet meeting that the Government will continue to work with local authorities to impose sweeping restrictions in the worst-hit areas under his new three tier Local Covid Alert Level regime.

His spokesman said: “The PM said the Government continues to work with local leaders in the North to agree additional interventions in Level Three areas, in order to drive down transmission of the virus.

“The PM said that for the Liverpool City Region we’ve successfully agreed a package of measures and support including the closure of gyms and fitness studios, casinos, adult gaming centres and betting shops.

“This is as well as closing pubs and bars, meaning the package of measures goes beyond the baseline for Level Three. The PM said these are difficult steps – but we have to protect the NHS and save lives.”

Referring to the advice from SAGE, the spokesman said the Prime Minister had to balance recommendations from science with the potential damage to the economy and society from lockdown measures.

The Cabinet minister said: “The Prime Minister was very clear – we do not want to have a blanket national lockdown.

“We don’t rule anything out, that would be wrong. We have to keep all the measures under review.

“So, if we can take a proportionate but localised approach, then we should be able to bear down on the virus in the places where it is most concentrated.”

He stressed: “We are not penalising any one part of the country – what we are trying to do is take a proportionate approach which doesn’t put in place measures in another where they are clearly not needed today.”