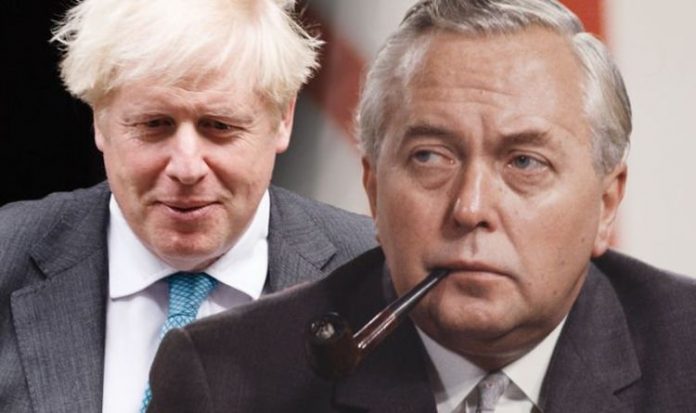 Mr Johnson’s first year in office has been anything but easy. It has seen Brexit, a baby and a brush with death from coronavirus. However, some of the challenges still lying ahead for the Prime Minister suggest the job is not going to get any easier.

The Prime Minister is keen to reopen as much of the economy as possible and has held out the prospect of life being back to something approaching normality by Christmas.

But it is possible that the virus will be more virulent in the winter months, adding to the seasonal pressure faced every year by the NHS.

Moreover, while Mr Johnson may have “got Brexit done” by getting the UK out of the European Union on January 31, the current negotiations on the future relationship with Brussels are proving just as difficult as the process of leaving.

Because of the complexity of these issues, many are now wondering whether Mr Johnson might resign sooner than expected.

In a recent report, journalist and former MEP Patrick O’Flynn argued that the former Mayor of London could follow in Harold Wilson’s footsteps.

He wrote for the Spectator: “Over the years there has been much speculation about the sudden resignation of Wilson as Prime Minister less than a year after he had settled, apparently for good, the momentous question of Britain’s future in Europe via the 1975 referendum. Was he forced out by MI5? Had he already got wind of his early-onset Alzheimer’s? Was there some other hidden personal scandal that would have emerged had he not stood down?

“The truth was rather more bland: it seems more likely that Wilson had just lost his appetite for the grind of the job. In a resignation minute circulated to all Cabinet Ministers he observed: ‘It is a full-time calling. These are not the easy, spacious, socially-orientated days of some of my predecessors… I have had to work seven days a week, at least 12 to 14 hours a day.’

“Few would suggest that Boris Johnson, for all his gifts, ever had a Wilsonian concentration span or a Stakhanovite work ethic. So it requires no great leap of imagination to suppose that the not easy, not spacious, not socially-orientated days he is enduring right now are not what he had in mind for his premiership.”

A source close to the Prime Minister was quoted as saying: “He is hating it.

JUST IN: Joe Biden ‘poised to side with Sturgeon on Scottish independence’

“One is struck by the degree of admiration for Gove’s brainpower, strategic nous and sheer skill at government that is felt across the political spectrum. Nigel Farage is but one unlikely admirer. At times each of the three most recent Tory PMs have viewed Gove as untrustworthy, but equally all three have also at times found him indispensable.

“Equally, even that may simply lead to more Tory MPs wondering whether it mightn’t be an idea to install someone who is good at both. It would not be the very greatest shock — certainly not a shock on the scale of Wilson’s resignation — were Johnson himself to reach that view.

“As he said once before when defining the mission facing the UK Prime Minister: ‘Having consulted colleagues… I have concluded that person cannot be me.'”