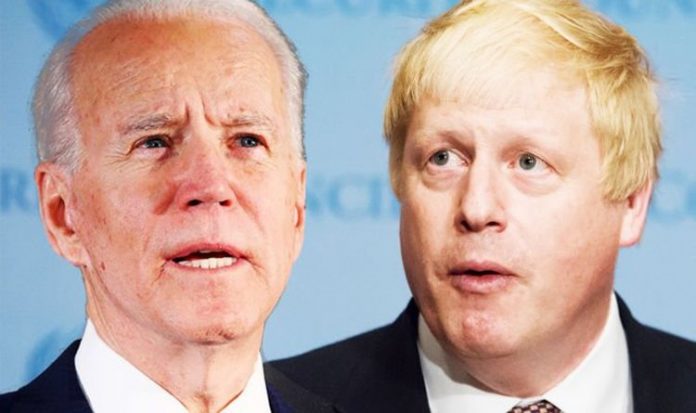 Prime Minister Boris Johnson has ordered ministers to prepare for the “strong possibility” of a no deal Brexit, warning that the UK risks being “locked in the EU’s orbit”. After a three-hour summit with European Commission President Ursula von der Leyen failed to yield any breakthroughs on Wednesday, Mr Johnson said he was prepared to “go the extra mile” by flying to Paris or Berlin for face-to-face talks with EU leaders. However, he said the EU’s current offer was unacceptable because the UK could not be treated like its twin.

Mr Johnson put an agreement with the US at the heart of his plans to revive Britain after Brexit, but in an exclusive interview with Express.co.uk, Alan Winters, director of the Trade Policy Observatory at the University of Sussex, revealed why the Prime Minister will almost certainly miss a crucial deadline.

In July, an obscure piece of US legislation that both governs the process through which trade deals pass through Congress and sets out the overarching principles of US trade policy, expires.

When protected by that legislation — known as the Trade Promotion Authority (TPA) — trade deals are effectively “fast tracked” through the US Congress with lawmakers unable to make substantial changes or amendments to the text of the deal.

In order to be protected by the TPA, a US-UK trade deal must be put before the US Congress by April.

If that deadline is missed, the deal will either be put before Congress without the fast-track protections offered, and risk being bogged down in dispute, or UK officials could wait for a fresh TPA to be negotiated.

Professor Winters said: “The chances of a trade deal with the US in the near future are really low.

“Americans want things out of the deal that are pretty unpalatable in the UK, such as chlorinated chicken and access to a pharmaceutical market at high prices.

“Basically all things that the Government has already said it cannot give.

“Now, they are not going to slip it through with Trump and Biden has lots of other things on his mind.

“He almost certainly will not appoint a trade representative to oversee the negotiations for a month or two.”

“I thought the UK would have struck free trade agreements with the US, Australia and New Zealand.

“But from what I hear from several sources, these deals are still far away.

“This is an advantage for the EU.”

He added: “Trade deals like these would have been used by the UK to replace EU products with American ones, for example.”

In a recent New York Times interview, president-elect Joe Biden said his priorities will be to improve investment in US manufacturing and the protection of American workers.