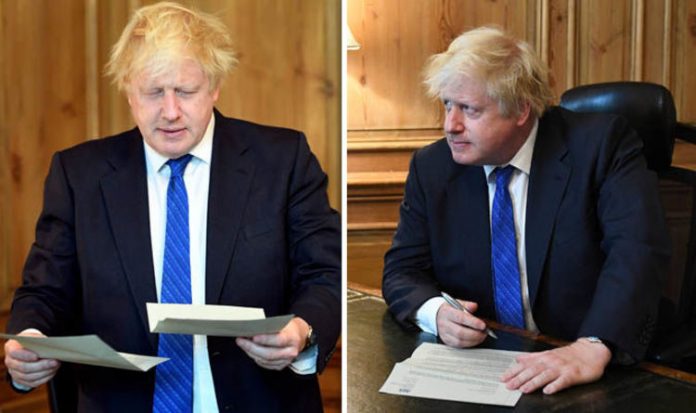 The photographs depicted the former minister signing his resignation letter addressed to Mrs May, while looking into the distance.

In his resignation to Mrs May, Mr Johnson said: “Brexit should be about opportunity and hope.

“It should be a chance to do things differently, to be more nimble and dynamic, and to maximise the particular advantages of the UK being an open, outward-looking global economy.

The photographs were heavily criticised by commentators from across the political spectrum, with one Labour figure accusing Mr Johnson of vanity.

MP David Lammy lambasted the former Foreign Secretary on Twitter, stating: “The fact that Boris Johnson arranged a photoshoot of himself singing his resignation letter for the front pages tells us everything we need to know about him.

“Self-obsessed, vain egomaniac devoid of substance caring only about himself and advancing his career. Good riddance.”

Sam Macrory, director of communications for Open Reason and adviser to Nick Clegg, added: “We all know that Boris Johnson’s decision to quit is absolutely not one man and his personal ambitions.

“But I’m struggling to think of another time where a Secretary of State called in the photographers to record the moment a resignation letter was signed.”

Mr Johnson also drew sharp criticism from politicians around the world, with Donald Tusk warning that the problems created by Brexiteers such as Mr Johnson would continue even following their departure.

The President of the European Council said: “Politicians come and go but the problems they have created for people remain.

“I can only regret that the idea of Brexit has not left with Davis and Johnson. But who knows?”

However the former Foreign Secretary’s actions were praised by key Brexiteers, who noted that his resignation was a principled move.

Conservative MP Zac Goldsmith said: “Boris could literally throw himself in front of a bus to save a child, and his opponents would still accuse him of being opportunistic.

“He’d never have wanted to resign from one of the great offices of state.

“That he did so shows how much he cares about respecting the referendum.”

Former UKIP leader Nigel Farage added: “Brave Boris Johnson. Now can we please get rid of the appalling Theresa May and get Brexit back on track.”