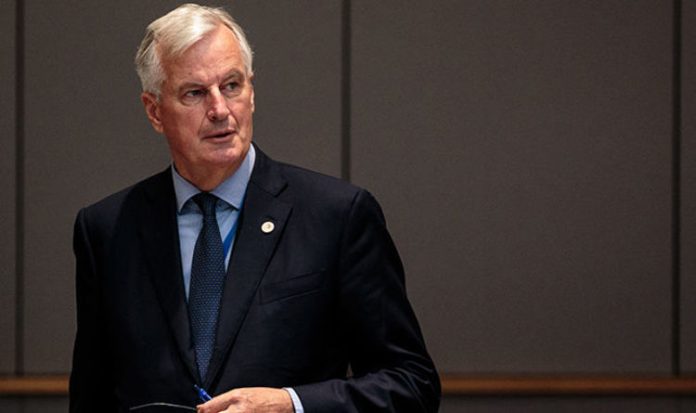 Henry Newman of Open Europe made his remarks on the day first Brexit Secretary Mr Davis and then Foreign Secretary Mr Johnson quit their posts expressing deep disatisfaction at an agreement which they believe would put UK too closely to EU once it quits the bloc next year.

He said: “The resignations of David Davis and Boris Johnson show just how difficult it would be for Theresa May to offer any further compromises to Brussels.
“So it’s crucially important that EU leaders take the Chequers offer seriously.

“If it’s rejected when further details are published later this week, it will be very difficult for the UK to soften its approach any further.”

The European Commission has so far refused to officially comment on the summary of the proposals agreed at Chequers.

Mr Barnier is due to make a speech outlining his position on Thursday after the publication of a Government White Paper.

European Commission President Jean-Claude Juncker appeared to be revelling in the chaos at Westminster.

Speaking yesterday, he joked: “It clearly proves that at Chequers there was a bit unity of views on Brexit.”

Meanwhile Donald Tusk, President of the European Council, seemed eager to pile on the pressure, saying: “This is the last call to lay the cards on the table.”

The European Commission’s chief spokesman Margaritas Schinas said: “What matters for us is the negotiating framework that our 27 member states have set out for us.”

He said the EU was “available 24/7” to “negotiation good will” with the UK throughout the summer in order to reach a deal.

In his resignation letter to Mrs May, Mr Davis said: “I am unpersuaded that our negotiating approach will not just lead to further demands for concessions.

“Of course this is a complex area of judgement and it is possible that you are right and I am wrong.

“However, even in that event it seems to me that the national interest requires a Secretary of State in my Department that is an enthusiastic believer in your approach, and not merely a reluctant conscript.”

Mrs May has since replaced him with Dominic Raab, while Jeremy Hunt has swapped his job as Health Secretary to take over as Foreign Secretary.