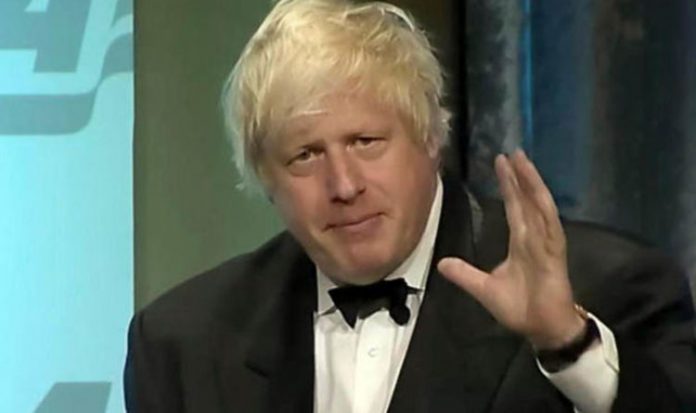 His comments came as senior Tory MP George Freeman, the Prime Minister’s former policy adviser, said Theresa May must step down after Brexit in March and make way “for a new generation”.

Mr Johnson revealed his political vision at a dinner in Washington on Thursday, where he was given an award by the American Enterprise Institute.

A recent survey of Tory Party members by the website ConHome revealed almost 30 per cent want him as leader.

Since he quit the Cabinet over the Chequers deal, there has been fevered speculation that Mr Johnson – who is understood to have the backing of many Eurosceptics on the Tory benches – is preparing to launch a bid to replace Mrs May.

In a question and answer session with wealthy Americans, Mr Johnson made it clear he wants to bring back the halcyon days of Mrs Thatcher and her domestic agenda which allowed many people to buy their own homes and shares.

He said: “Social mobility. If you think back to the great achievements of the Thatcher era, it was about helping people to seize control of their own destiny.

“It was about buying shares or buying their own homes.

“We need to recover that momentum. One of the reasons people voted to Leave was because they felt they were not getting a fair suck of the sauce bottle, as they say.

“People are stuck in entry-level jobs and they’re not progressing. And we’re not focusing on those issues, we’re not helping people enough. People are not being made to feel needed enough. And it’s a serious problem.”

The former London mayor has been a fierce critic of Mrs May’s controversial Chequers plan, which limits the opportunities for free trade deals with the rest of the world and forces the UK to accept EU rules.

He said: “We have a choice. And I would just say to all you scholars and supporters of the AEI, this is a critical moment for anybody who cares about free markets, about competition, about global free trade.

“The UK could be about to come loose of the European system of regulation and government…able to campaign for pro-competitive policies. That’s the opportunity.”

READ  Royal news: Camilla is an important tool for Royal Family thanks to skill 'drilled' in her | Royal | News (Reports)

Mr Johnson added: “There’s a conversation going on about how we achieve it and it is difficult.

But the last thing we want now is for us, the Brits, to be sucked back by the tractor beam of Brussels.

“The EU, for all its achievements, it really is no longer right in its current form for the UK. We’ve done the right thing.

“But having done that, we’ve got to make sense of it. And there is no point at all in us coming out of the EU only to remain effectively run by the EU.

Mr Johnson also set himself up as a unifying figure, saying the country must come together after Brexit.

He joked: “The best thing possible to unify the country would have been if we’d beaten the French in the World Cup. That was my plan. It’s back to the drawing board. We came fourth.”

Earlier, Mr Freeman said of Mrs May: “She deserves the chance to honour her promise and deliver our departure from the European Union on March 29. But the shape of our future relationship must be forged by a new leader.

“Someone liberated from the poisonous politics of the EU referendum and the shambles that has followed.”

He said: “While there remain some substantive differences we need to resolve, it is clear our teams are closing in on workable solutions to the outstanding issues in the Withdrawal Agreement and are having productive discussions in the right spirit on the future relationship.”

He added: “Looking ahead, we agreed to review the state of play in the negotiations following the informal meeting of heads of state or government of the European Union in Salzburg next Thursday, and we reiterated our willingness to devote the necessary time and energy to bring these negotiations to a successful conclusion.”