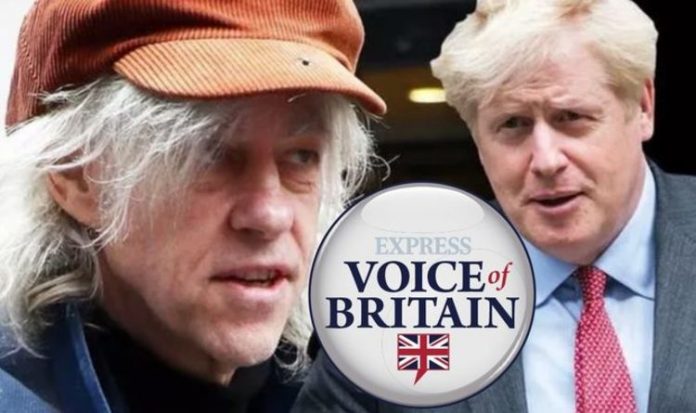 The UK is facing its biggest economic crisis since World War Two and earlier this week it was confirmed national debt has soared above £2trillion. Chancellor Rishi Sunak is expected to spell out a bleak picture for the upcoming year when he delivers the annual spending review in the Commons on Wednesday.

Mr Sunak is widely expected to slash the UK’s spending commitment on foreign aid from 0.7 percent of national income to 0.5 percent in order to raise around £4bn.

Band Aid co-founder Bob Geldof has since joined former Prime Ministers David Cameron and Tony Blair as well as the Archbishop of Canterbury Justin Welby in urging the Government not to cut oversees aid.

Mr Geldof, 69, who is widely recognised for his activism surrounding anti-poverty efforts across Africa branded the proposals “unconscionable”.

His remarks have prompted a furious response from a large number of Express.co.uk readers.

Reacting to an earlier story shared on the Express.co.uk Facebook page, several users who are already struggling to make ends meet, urged Mr Geldof to dip his hands into his own pocket and insisted it would be right for the Government to cut overseas aid in the current circumstances.

One reader said: “Foreign aid should be stopped, we should only help out when disasters strike, we have enough in our own country that needs money spending on without giving it away.”

A second user wrote: “Mind your own business, you don’t have to worry about money, this is for the less fortunate in the country, charity begins at home.”

A third commented: “Right now we need our money for our own country, so if you have issues Bob get your hands in your own pockets because believe me by the time this is all over us commoners will be called to pay for all this extra Covid spending.”

A fourth added: “If you’re that bothered, donate some of your own money.”

Meanwhile, a fifth said: “Use your money Bob instead. People in this country need help.”

Speaking this weekend ahead of the spending review, Mr Sunak confirmed £3bn has been earmarked for the NHS.

But the Chancellor warned the nation is experiencing an “economic shock” that must be paid for somehow.

READ MORE: Brexit LIVE: Rishi Sunak promises to walk away with no deal

“There is no need for the chancellor to raid this piggy bank for pennies. Boris Johnson must drop this plan now.”

David Cameron who oversaw the country first meeting the 0.7 percent target in 2013, said abandoning it would be a “moral, strategic and political mistake”.

Meanwhile, former Labour Prime Minister Tony Blair said foreign aid – and the 0.7 percentage target – had been a “great British soft power achievement” and that it had saved millions of lives.

Last week, the Prime Minister’s official spokesman drew attention to the fact the legislation enshrining the 0.7 percent target in UK law explicitly acknowledged it might not always be met.