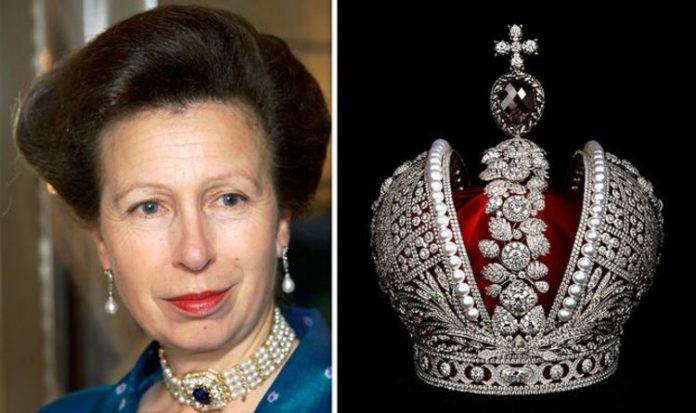 Until Vladimir Lenin’s Soviets took control of Imperial Russia to create the world’s first communist state, the Romanov family ruled the biggest nation on Earth. The royals ruled Russia for 300 years and during this time accumulated an enormous collection of crown jewels. These included masterpieces such as Faberge eggs and countless stunning bracelets and brooches.

But after the fall of the crown and the subsequent civil war, Lenin and his communist colleagues wasted no time in selling off the jewelry to raise funds for the new society.

Priceless Romanov treasures were auctioned off or sold to millionaire families across western Europe and the US.

To this day, the location of several pieces remains a mystery – and the Russian crown jewels will likely never fully be restored.

However, one such piece found its way into the hands of the British Royal Family.

Princess Anne is the current owner of the Empress Maria Feodorovna choker.

It features a large diamond and sapphire clasp at the centre of four strands of pearls with gold as diamond spacers.

It can also be taken apart and worn as a brooch and two pearl bracelets.

When the Romanov family fled Russia, after Tsar Nicholas II and his children were murdered in 1917, this choker was among the jewels the Empress brought with her.

After her death in 1928 it was inherited by her daughter, Grand Duchess Xenia, who later auctioned a selection of her mother’s jewels in London.

Queen Mary of Teck – Queen consort to King George V – brought the choker for a reported £6,000 (roughly £400,000 today) and wore it both as a necklace and disassembled.

When she died, the choker was inherited by Queen Elizabeth II, who then passed it on to Anne.

Some key pieces of the Russian crown jewels did remain in the country, though.

The Imperial Crown – used by all Russian monarchs starting with Catherine II and ending with Nicholas II – survived the 1917 revolution.

Today it is locked in the Kremlin’s Diamond Fund collection – but it is not on show to the public because it is deemed too valuable.

Anne’s brooch is not the only link between the British monarchy and the Romanov dynasty, either.

Prince Philip’s DNA was even used to identify the remains of the last Tsar and Tsarina.

Although Nicholas II and Alexandra Feodorovna were found alongside three of their five children in the late 20th-century, it was not until the skeletons of a young male and female were found in a field near Yekaterinburg in 2007 that historians were hopeful the family could, at last, be reunited.

Researchers suspected that they could be the lost remains of the Romanov children, 13-year-old heir Prince Alexei, and either Grand Duchess Maria or grand Duchess Anastasia.

Because the Duke of Edinburgh is related to the Romanovs, he was approached to provide DNA to compare with that of the last Tsar and Tsarina.

The Duke agreed to provide the sample in 1993 to conclusively identify Tsar Nicholas and Tsarina Alexandra’ bodies, alongside three of their four daughters.

When the 2007 discovery was made, scientists were then able to compare their DNA with Prince Philip’s, and that from the earlier testing of the Romanov family remains.

The Royal Family is related to the last Tsars through Queen Victoria.

Queen Victoria was also the grandmother of the last Tsarina.