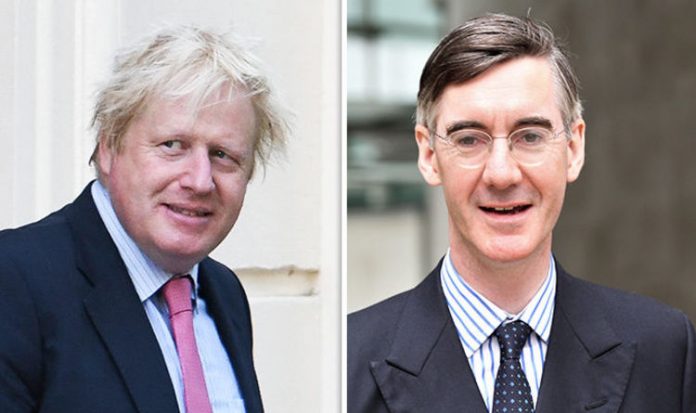 Theresa May urged the outspoken MP to apologise for his comments as Tory officials warned he could face disciplinary action.

But the extraordinary row does not appear to have harmed Mr Johnson’s chances of replacing Theresa May as Conservative leader.

Bookmakers Ladbrokes have slashed the odds on Mr Johnson heading the Tory party after Mrs May steps down to just 5/1.

His odds were cut after a punter in Cardiff placed a £1000 wager on the Brexiteer MP at 6/1 last week.

Mr Johnson’s odds were just 12/1 before he dramatically resigned from the Cabinet last month in protest at Mrs May’s EU divorce plan.

His decision to quit the Prime Minister’s top team sparked a flurry of speculation he was lining up a leadership bid.

Ladbrokes spokeswoman Jessica Bridge told Express.co.uk: “Boris Johnson has survived many gaffes and blunders in the past.

“With punters backing him left, right and centre to become the next Tory leader, it looks like a classic case of striking while the iron’s hot.”

Mr Johnson’s closest contender in the race to replace Mrs May is Home Secretary Sajid Javid at 6/1, according to Ladbrokes.

Brexiteer backbencher Jacob Rees-Mogg is fancied at 7/1 while Environment Secretary Michael Gove is tipped at 8/1.

Jeremy Hunt, who replaced Mr Johnson as Foreign Secretary last month, has odds of 10/1 to step into Mrs May’s shoes.

Mr Johnson has repeatedly refused to apologise for his remarks on the burka, made in his Daily Telegraph column last week.

His comments on the Islamic veil were been branded “inflammatory and divisive” by the Equality and Human Rights Commission.

And Mohammed Amin, the head of the Conservative Muslim Forum, said the remarks were “simply improper for a senior British politician”.

But Mr Johnson won support from Mr Rees-Mogg who said he “entirely agrees” with the former London mayor over the issue.