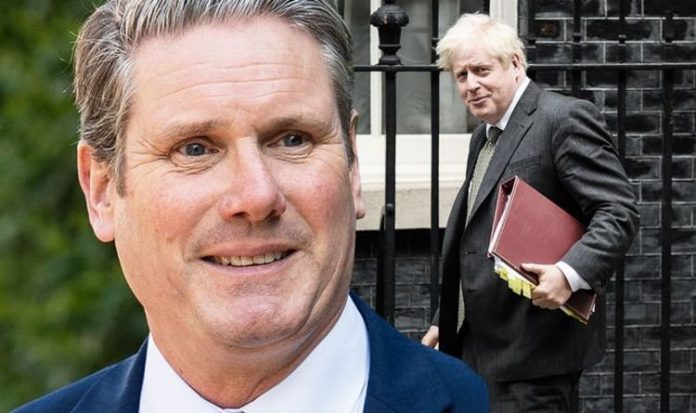 The poll, conducted by former Conservative deputy chairman Lord Ashcroft, asked voters if they would rather vote for a Keir Starmer led Labour Party or a Boris Johnson led Conservative Party.

A total of 53 percent opted for a Government under Labour leader Keir Starmer.

Only 47 percent choose the Conservatives under Boris Johnson to steer the country through the pandemic.

Speaking on his blog about the findings of the poll Lord Ashcroft said: “The coronavirus crisis has exposed Boris Johnson’s own apparent weaknesses, with some saying he seemed overwhelmed by a crisis that required grip and attention to detail.

“While 27 percent in my poll said he was doing a good job, a further one in five said he could be a good PM under different circumstances but was not the kind of leader we needed at the moment.

“Some wonder whether he has really recovered from his own encounter with Covid.

“In my poll, the words most often chosen to describe him were ‘out of his depth’ and ‘incompetent.'”

Rishi Sunak had a higher personal rating than Keir Starmer and Boris Johnson in the research conducted by Lord Ashcroft.

The Chancellor’s approval rating tallied at +2 points in an opinion poll based upon a negative to positive scale ranging from -50 to +50 .

A participant in a focus group attached to the poll was very complimentary about Mr Sunak.

The participant said: “Rishi has stood out for me.

“How he addressed the public was quite reassuring.

“He’s the most confident and competent of all of them.”

Speaking about the Chancellor another participant said: “I felt like I was being looked after.

The focus group gave divided opinions about the Prime Minister.

They used terms such as “indecisive”, “overwhelmed” and “flaky”.

Others polled said we should “cut him some slack” because of the difficult times we are in.

Lord Ashcroft said most people were concerned about Boris Johnson’s reaction to the coronavirus crisis.

He said people were concerned the Prime Minister “did not take action sooner, by at least restricting flights from covid-hit countries like China?”