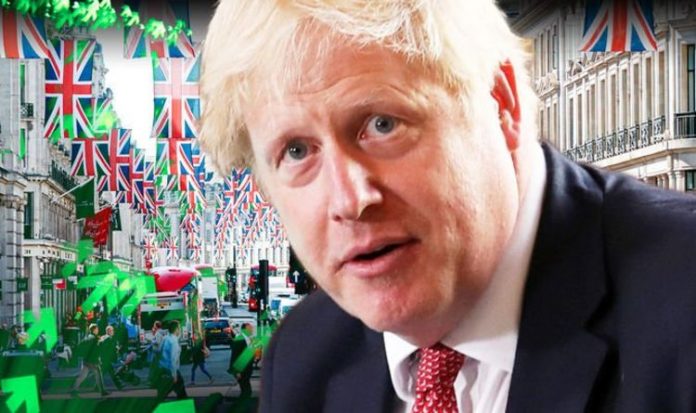 The UK economy suffered its biggest slump on record between April and June as coronavirus lockdown measures pushed the country officially into recession, shrinking 20.4 percent compared with the first three months of the year. Chancellor Rishi Sunak said the Government was “grappling with something unprecedented” and that it was “a very difficult and uncertain time”. But Ludlow Conservative MP Philip Dunne has a plan to reinvigorate the economy and work towards reducing carbon emissions at the same time.

He wrote to Business Secretary Alok Sharma last week calling for a hydrogen strategy to form a key part of the National Infrastructure Plan this autumn.

Mr Dunne, Chairman of the Environmental Audit Committee, told Express.co.uk: ”The UK is in a unique position, hosting the UN Climate Change Conference next year to show global leadership in developing decarbonised energy.

“Hydrogen can play a major part in our future energy mix.

“Our cross-party committee of MPs heard evidence last month that the UK is in a good position to capitalise on our research and technology lead in developing hydrogen as part of decarbonising our energy supply.

The UK economy could be greatly helped by an investment in renewable energy, Mr Dunne said (Image: GETTY)

Rishi Sunak made an announcement on the UK economy today (Image: GETTY)

“Other countries have launched hydrogen strategies to provide a framework to stimulate demand and supply chains, including an announcement last month of a major investment by the EU.

“The UK has made some modest positive steps so far, but a coherent plan is now urgently required from the Government if we are not to miss out on becoming a leader and instead are left behind merely as a customer in this key technology of the future.”

Mr Dunne explained why a hydrogen-focused plan could be so beneficial for both the economy and the environment, before sending a direct message to Mr Johnson.

He added: “Hydrogen offers the potential to help reduce reliance on fossil fuels for a wide range of transport and industrial energy uses, even playing a part in domestic heating.

“Investing in a hydrogen strategy can help capture international leadership, cut emissions, and create jobs in parts of the country where we need to level-up our infrastructure investment.”

MP Philip Dunne has called for an investment into hydrogen (Image: WIKI)

Mr Dunne believes with the right strategy, investing in hydrogen projects could open up millions of new jobs.

He added: “Our committee heard evidence that the global hydrogen economy could create 30 million new jobs by 2050.

“The UK would be set to get a chunk of this if we can build on the competitive advantages we have.

“As the economy shifts from reliance on fossil fuel to clean energy over the coming 20 years, there will be enormous scope for entrepreneurial people to build on the UK’s technical innovative expertise to create sustainable jobs and wide-ranging applications to benefit the economy as well as the environment.”

Hydrogen Strategy Now, which represents 50 leading businesses and employs more than 100,000 people is looking to invest £1.5billion in hydrogen projects across the UK.

The Government has already pledged to reach net-zero carbon emissions by 2050 and Mr Dunne says this plan could be key to helping achieve that goal.

Boris Johnson has been urged to lead the initiative (Image: GETTY)

He added: “Hydrogen can form part of the solution to achieve net-zero Britain, particularly in hard to decarbonise areas like surface transport, aviation and shipping, and could also contribute to reducing the impact of domestic heating.

“At present hydrogen is costly to produce.

“One objective of a hydrogen strategy would be to stimulate demand so that the supply chain could invest with confidence in increasing production capacity, which in turn will bring down costs of production and increase the range of applications.

“This has worked very effectively in reducing the cost of offshore wind energy generation.”

But Mr Dunne says the UK risks falling behind if action is not taken now, not least to the EU who have launched their own initiative.

He continued: ”Many countries are latching on to the potential for hydrogen and developing their own strategies.

“The EU announced its hydrogen strategy last month, which proposed up to €470billionn (£424billion) of investment in hydrogen development.

“Australia, Canada, China, Japan, South Korea are all actively pursuing their own path to a hydrogen future.

“The UK needs to include this as a key component in our infrastructure strategy this autumn or risk surrendering our nascent leadership in relevant technologies to other nations prepared to act decisively.”

UK companies have already started working on such projects.

“At Wrightbus, we’re proud to have developed the world’s first zero-emission double-decker hydrogen bus, and even prouder to say that it will be transporting passengers around streets in the UK before the end of the year.

“We’re investing heavily in the hydrogen sector to support the decarbonisation of public transport across the UK and island of Ireland because we can see the enormous economic and environmental potential ahead for businesses and consumers alike.

“Earlier this year we presented plans to the Government that, if backed, would directly lead to the creation of 1,000 jobs at Wrightbus and 150 jobs at our sister company, Ryse Hydrogen.

“The sector as a whole has the potential to support hundreds of thousands of high-quality jobs.”

“Investing in hydrogen could unlock £18billion in Gross Value Added by 2035 and support 75,000 additional jobs in the UK alone.

A hydrogen-focused strategy is key, according to industry experts (Image: GETTY)

“Many of these jobs would be concentrated in the North West and North East where hydrogen could play a key part in regional development, alongside contributing to the UK’s net-zero target.

“Cadent is calling for a national hydrogen strategy to help drive forward this developing industry and ensure we capitalise on the technical projects which are already underway in the north-west and across the UK.”

He said: “Renewable hydrogen is currently one of the most promising tech solutions the maritime sector is working on.

“Not only is it more suited to transporting long-distance carriage compared to battery technology, but it can also be stored into ammonia – which is a serious contender as a renewable fuel for large ships over longer distances.

“The UK has the opportunity to benefit from a significant early-mover advantage here.

“Demonstrating hydrogen’s effectiveness as a zero-emission fuel within the maritime sector could be an enabler for the hydrogen economy in transport more widely.

“If you consider that the global market for alternative maritime fuels will be around £11billion by 2050, this is a huge prize to be won.”