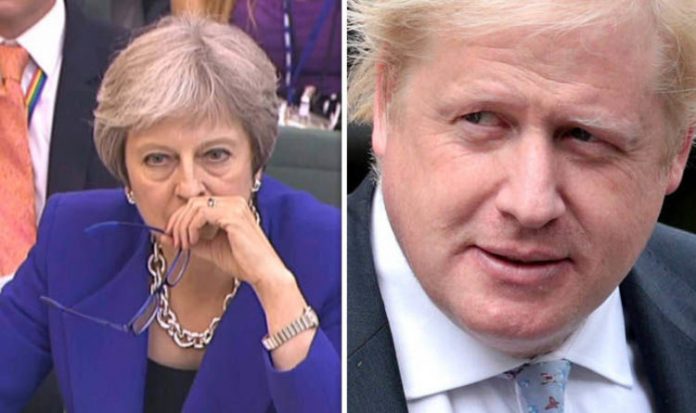 The Tory MP made a personal statement 10 days after he quit his ministerial post, claiming the UK was headed “for the status of a colony” under Mrs May’s soft Brexit plans.

Addressing MPs this afternoon, Mr Johnson warned a “fog of self-doubt has descended” upon Brexit negotiations since the June 2016 referendum.

He praised the Prime Minister’s “courage and resilience” but ripped into her “miserable plans” for closer ties with the European Union.

What did Boris Johnson say? Speech below

In his resignation speech, Mr Johnson said the Prime Minister had set out a vision “with great clarity” at Lancaster House in Jan 2017 but these policies have since been watered down.

He said: “We never actually went to Brussels and turned it into a negotiating offer.

“Instead we dithered. We burned through negotiating capital.

“We agreed to hand over a £40bv exit fee, with no discussion of our future economic relationship.

“We accepted the jurisdiction of the European Court over key aspected of the withdrawal agreement.

“And, worst of all, we allowed the question of the Northern Irish border, which had hitherto been assumed on all sides to be readily soluble, to become to politically charged as to dominate the debate.”

The outcome of this, he warned, was ministers having “no power to initiate, innovate or even deviate” with “less scope to do free trade deals”.

Adding to this, he said the public’s intelligence was being continually underestimated by politicians telling the EU one thing “about what we are really doing, and another pretending to the electorate”.

According to Mr Johnson, this is a “fatal mistake”, although he said “it is not too late to say Brexit”.

He said: “We have time in these negotiations. We have changed tack once and we can change again.”

He added: “We need to take on decision now before all others – and that is to believe in this country and what it can do.”

Mr Johnson made his comments in a 12-minute address while Mrs May faced a panel of senior MPs on Westminster’s Liaison Committee.

Asked by the head of a parliamentary committee whether she would warn the public about the consequences of a “no deal” Brexit, May answered: “You have based your question on an assumption that said we were getting closer to a no deal scenario.

“I don’t believe that is the case. We have put forward a proposal for what the future relationship should be … and we are in negotiations on the basis of that.”