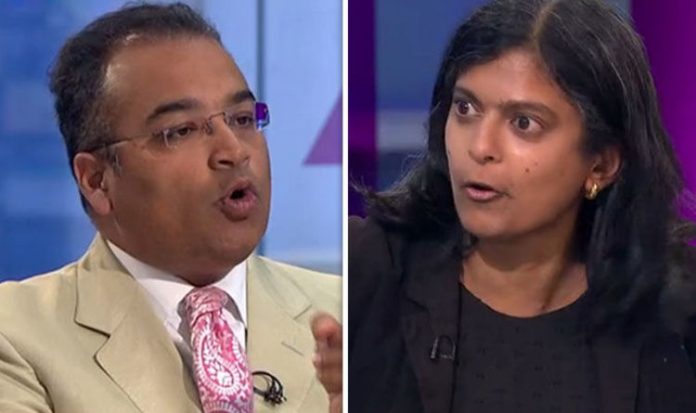 News anchor Krishnan Guru-Murthy admonished her on the Channel 4 news programme saying, “I’m not sure that language is okay at this time, we’ll have no more of that.”

Ms Huq was invited onto the news programme along with The Spectator’s Freddy Gray to discuss Johnson’s recent controversial comments on the burka – in his weekly Telegraph column he said those who wore the religious veil “looked like letter boxes” and compared them to “bank robbers”.

Anchor Guru-Murthy asked whether Johnson’s comments represented what he called the “Trumpification of British politics” calling the Tory MP for Uxbridge and South Ruislip “deliberately provocative”.

Describing the comments as “calculated” the Labour MP continued: “The Boris of old used to be mildly amusing… but this had a disturbing undertone. I think this was deliberately calculated actually, and this idea that you can just sort of brush it off….

“I do think this is different from the previous stuff – Obama is a Kenyan, the EU is Hitler – because I think he’s done this on purpose.”

“I don’t think this is about the burka anymore. This is about him and his naked ambition to get his grubby fingers on the keys of No.10. He doesn’t mind being a disruptor on the way.”

Whilst former Tory attorney general Dominic Grieve has threatened to quit the party if Johnson became leader after making the controversial comments, a senior man has said that he agrees with Johnson on the issue.

Taj Hargey, Imam at Oxford Islamic Congregation, said Mr Johnson “should not apologise for telling the truth”, adding that his comments did not go far enough.

The Labour MP for Ealing Central and Acton later seemed contrite over her strange impression, tweeting: “Meant to say @Channel4News “The Boris of old was mildly amusing but the loveable rogue act’s worn thin and now he’s dangerously pandering to the far right” but never ended sentence… Thanks @krishgm for stepping in before I tried to throw in some Latin to top it off.”

Many Twitter users praised her theatrical skills calling it a “superb performance” and lauding her “fantastic impression”.

But others failed to see the funny side writing: “So making fun of Boris is ok, but when he makes fun of comments about something that upsets you that is wrong”.