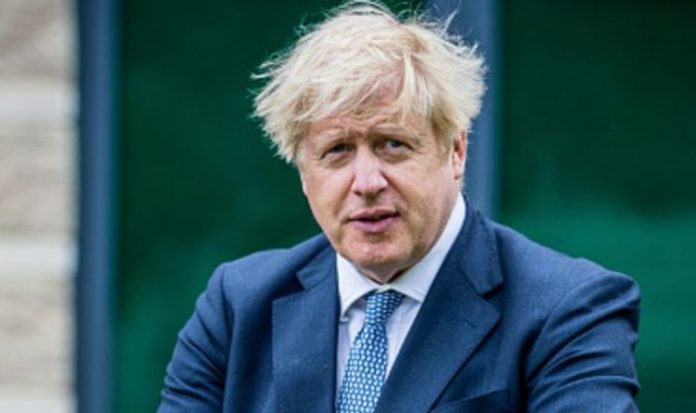 Prime Minister Boris Johnson has said he wants to work with the French to stop the illegal crossings. Questioned on Sky News on what the Prime Minister really meant by his statement, Junior Health Minister Edward Argar said: “What he’s looking at, quite rightly, is greater flexibility in returning people who have come here illegally and need to be returned back to France.”

The Government has been facing increasing pressure from Conservative MPs after fine weather and calm seas saw hundreds take to the water in an attempt to reach the UK.

Immigration minister Chris Philp is to hold talks with French counterparts in Paris in an attempt to stem a fresh upsurge in migrants crossing the Channel in small boats.

More than 4,000 migrants have made it so far this year after completing the dangerous voyage across the world’s busiest shipping lane, with at least 597 arriving between Thursday and Sunday.

Boris Johnson on Monday condemned the activities of the “cruel” criminal gangs who were putting lives at risk, taking people out in potentially unseaworthy vessels.

READ  Coronavirus deaths UK: How many have died from covid in UK? | UK | News (Reports)

Home Secretary Priti Patel, who went to see for herself the Border Force operations at Dover, said the UK authorities now needed to work with the French to make the route “unviable”.

“The number of illegal small boat crossings we have seen recently is totally unacceptable,” she said.

“Our operational partners are dealing with complex challenges associated with them and collectively with the French we need make this route unviable.

“Across Government we are absolutely committed to shutting down this route and we will bring down the criminal gangs that facilitate these illegal crossings.”

Officials said that they wanted to build on the joint work already under way, exploring the options for tougher action in France, including stronger enforcement measures, interceptions at sea and the direct return of boats.

However the Government was facing criticism from French politicians after the Home Office formally requested the assistance of the Royal Navy to deal with the problem.

Calais MP Pierre-Henri Dumont said it was a “political measure” intended to show ministers were taking action but warned that it “won’t change anything”.

Meanwhile Downing Street has suggested leaving the EU would allow the UK to draw up a new framework for dealing with migrants, ending the “inflexible and rigid” requirements to ensure asylum applications are examined and considered.

In further move to show ministers were serious about dealing with the issue, an RAF Atlas A400M surveillance aircraft was deployed over the Channel on Monday with spotters on board to support the Border Force operation.

The latest outcry follows a similar storm last summer when another upsurge in crossings led Mr Johnson to warn Britain was prepared to start sending back those migrants who did make it across.

Ms Patel met the then French interior minister Christophe Castaner in Paris on August 29 last year when they agreed to step up resources to intercept and stop the wave of crossings.

There were suggestions from the French side that the UK could put more money into efforts to tackle the problem, reinforcing its patrols and improving the effectiveness of the three Border Force cutters stationed in the Channel.

It followed an earlier plan drawn up under former home secretary Sajid Javid, including a £6 million investment in security equipment, CCTV coverage of beaches and ports and a mutual commitment to return migrants under international and domestic laws.