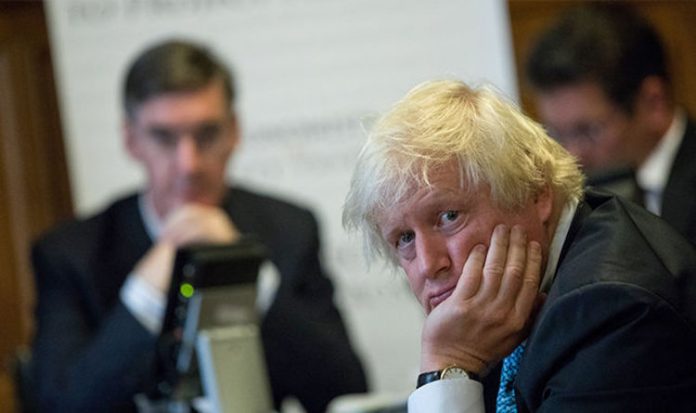 Sources close to the Brexiteer said his primary focus was on persuading Mrs May to drop her plans in favour of a free-trade agreement – but they did not deny that he wants to take over as leader.

Mr Johnson caused havoc over the weekend after he described the Prime Minister’s Brexit plans as a “suicide vest”.

The pro-Brexit campaign against the Chequers plan, the European Research Group (ERG), stalled on Monday over uncertainty whether they would publish their long-awaited alternative proposals.

A friend of Mr Johnson said: “Is he going to lead the ERG and depose her now? The answer is no. His plan is still to show what he believes are the failings of Chequers and get her to change her mind and revert to Lancaster House.

“Yes, he’s talking to them but he doesn’t want to be fronting any leadership challenge, that’s not what he’s interested in. He’s interested in changing the policy, not the prime minister. Everyone knows he eventually wants to try to become leader. But not now.”

Another of Mr Johnson’s allies said: “He will continue to throw rocks at Chequers because he thinks she should be changing direction. He’s not chucking them at the PM.

“Like all the anti-Chequers voices, he thinks she should go back to the original version of Lancaster House, which was supported by a broader section of the Conservative party.”

Mr Johnson plans to use his column in The Telegraph in the run-up to the Tory conference to persuade Mrs May to change her mind.

The leading Brexiteer is no longer thought to be in contact with Mrs May, but his lunch meeting with chief whip Julian Smith last week led to speculation communication was still open.

Mr Johnson will only spend a day at the conference where will hold a “chuck Chequers” rally along with as many as 1,000 Tory activists.

The former Foreign Secretary was embroiled in a scandal last weekend amid claims Downing Street had a “dirty dossier” which compiled a list of controversies Mr Johnson has been involved in.

Those close to him said it was a “smear campaign” to discredit him because of his popularity.

Tory MPs loyal to Mrs May said they were ready to resign from the party to stop Mr Johnson becoming leader.

A senior Tory said 12 or more MPs would refuse to serve under Mr Johnson, which would effectively deprive the Government of a majority.

The MP said: “Boris will never be prime minister – he would split the party.

“There are a large number of us determined to make sure he does not get onto the ballot paper whenever the leadership contest takes place.

“If he did somehow manage to win then there are many of us – well into double figures – who would resign the party whip. He would lose the Government’s majority. He could not govern.”