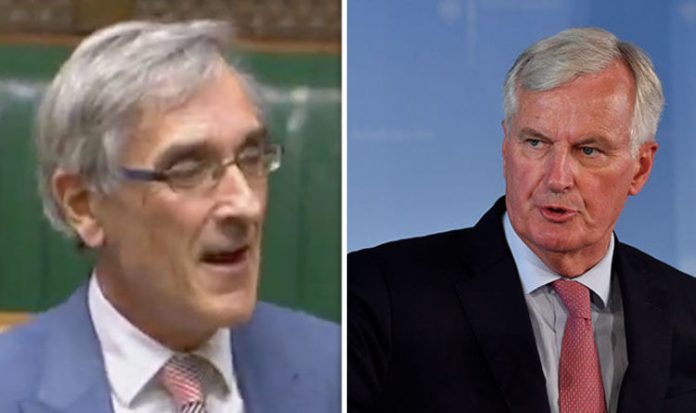 The MP for Wokingham and arch-Brexiteer complained that the government’s Brexit negotiation strategy was akin to putting money down on a shop counter, and then asking the shop if they could do you a deal.

Mr Redwood said with a wry smile as he addressed MPs: “I don’t know about the government, I sometimes worry about how the government goes shopping.

“It seems to me that’s what the government did here, it put £39 billion down because they’ve got rather more money than I’ve got, lucky them —

“They put this £39 billion on the counter and then said, ‘Oh, by the way, EU, it would be quite nice, because we’ve got these dreadful Eurosceptics back at home who want value for money if you could offer us something that might be suitable for us?”

The UK has reportedly set aside a figure of £39billion to honour a settlement with the EU even in the event of a no-deal Brexit.

Brexit Secretary Dominic Raab has declared the UK will refuse to pay the £39 billion EU divorce bill if Brussels fails to agree to a viable trade deal, in a stark warning to the bloc.

The Brexit secretary indicated the UK’s payment of the divorce bill must be “linked” to the EU’s agreement to a final trade deal and withdrawal agreement.

Brexit negotiations have been fraught, with Ms May’s Chequers deal proving unpopular with both her own party and chief EU negotiator Michel Barnier.

However, a more optimistic note has been struck in recent days with the EU’s chief Brexit negotiator said concluding an agreement on a future partnership between the UK and the bloc by the start of November was both “realistic” and “possible”.

Mr Barnier yesterday suggested that a deal could be struck between the EU and the UK in just six weeks.

His remarks followed reports that the EU is poised to revise his instructions in the negotiations to allow more leeway to come to a compromise with Theresa May.