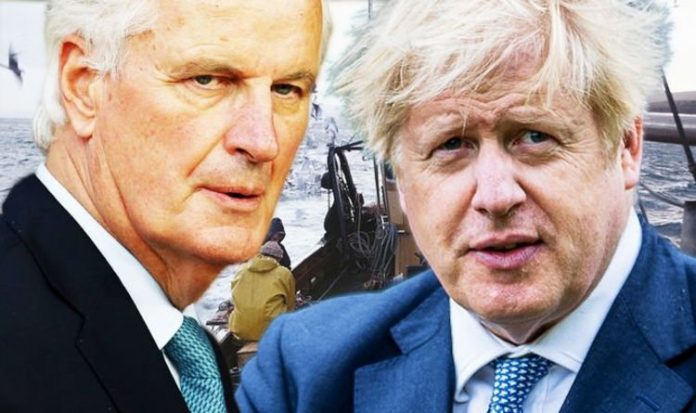 The British and European negotiating teams are holding talks in Brussels this week. While the discussions have made little progress so far, the two sides appear more willing to compromise this time. According to Brussels sources, the UK has offered a three-year transition period for European fishing fleets to allow them to prepare for the post-Brexit changes as part of an 11th-hour deal sweetener.

In a report for the Brexit think tank ‘Red Cell’, titled ‘Putting The Fisheries Negotiations Into Context’, former Conservative MP Patrick Nicholls claimed it would actually be wise to give the EU a generous deal on fisheries in exchange for something else, as fishing is a minuscule part of our economy.

Mr Nicholls was the Conservative MP for Teignbridge between 1983 and 2001.

Within a year of entering the House of Commons, Mr Nicholls was made a Parliamentary Private Secretary to the Home Office Minister David Mellor, and subsequently to the Minister of Agriculture John Selwyn Gummer.

Mr Nicholls argued that if it was “just a matter of money”, and if the UK’s motive for leaving the EU was based simply on perceived economic advantage, it would not be a bad approach.

He wrote: “At first glance, that is a ‘no-brainer.’

“Britain’s fishing industry is miniscule. It represents just 0.1 percent of GDP. And no wonder. Since Edward Heath signed away our fishing grounds to the EU to compensate them for the fact they had all but fished out their own waters, our share of the allowable catch in UK waters has decreased to just 25 percent.

“The remaining 75 percent is taken by the EU.

Fishing is a minuscule part of the British economy (Image: GETTY)

“By contrast, our finance industry is vast. It amounts for more than 10 percent of GDP, creating in the process literally millions of well-paid jobs. The tax revenue it generates is vast.”

However, Mr Nicholls claimed that the Brexit project is not and never was “about the money” and that is exactly why Mr Johnson should not cave in to Brussels’ demands on fishing.

He explained: “The Brexit project is about restoring morality to politics.

“It’s about restoring to the British people the right to govern themselves by electing and dismissing the politicians who govern their lives. How did they ever lose that right?

“How was it that in 1975, when granted a referendum on membership of the European Union, or rather the Common Market as it was then, they seemingly surrendered that right?

“And the answer is that the British people were systematically lied to about the nature of the Union they were joining and they were lied to specifically about what had been surrendered in the matter of fishing policy.”

Mr Nicholls added: “That is why Boris Johnson must get this right and to his great credit he has never sought to suggest that stuffing what is left of the British fishing industry is just a ‘cruel necessity,’ an unfortunate but unavoidable exercise in realpolitik.

“We need to be clear here. It is not that Boris Johnson or any of today’s Conservative leaders are themselves guilty of what their forebears did.

“The Prime Minister was only 8 years old when we entered the Common Market in 1972.

“No guilt can attach to him or any of today’s Conservative leaders for what their forebears did, unless by betraying the fishing industry a second time they choose to endorse and embrace that guilt.”

In an exclusive interview with Express.co.uk, former Conservative MEP Daniel Hannan claimed Mr Johnson will undoubtedly deliver on his promise and give back to British fishermen full control of their waters, reversing former Prime Minister Edward Heath’s move.

The former Tory Prime Minister is known for being the man who took Britain into the now-European Union in the early Seventies.

This, however, is going to change once the transition period ends in December 2020.

The former Conservative MEP explained: “I don’t think there is any chance that we will now not insist on the sovereignty of our territorial waters.

“Before we joined the European Economic Community (EEC), we always had bilateral and multilateral agreements with our neighbours like every other country in the world does.

“If fish spawn in the waters of one country, reach maturity in another, of course those two countries will get together and agree a quota system that they can both share and benefit from.

Mr Hannan noted: “But it will be on the basis that we are a sovereign country, making agreements with our neighbours rather than on the basis that North Sea fish stocks are a common resource to which all members have equal access.

“Mr Johnson has been very clear about that.

“We will take back sovereignty out to 200 miles all the medium line, as allowed under maritime law.