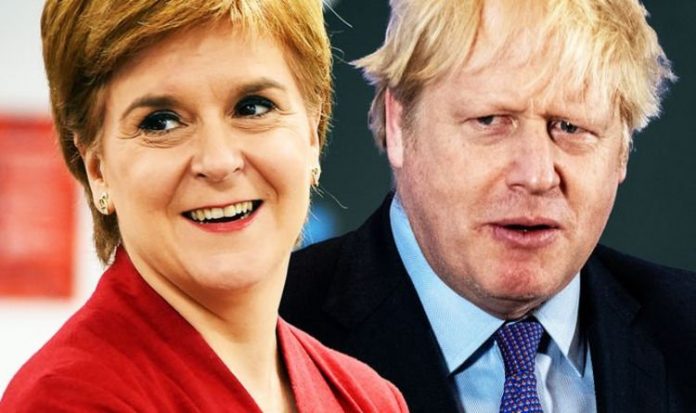 Boris Johnson has been put under pressure over the future of the union as Nicola Sturgeon continuously demands a referendum on Scottish independence. While speaking on BBC Newsnight, polling expert Sir John Curtice claimed that Nicola Sturgeon is hoping for a strong majority in the upcoming Holyrood elections. Sir John claimed that if the SNP campaign on the point that voting for them is a vote for a second independence referendum, if they win a majority it strengthens Ms Sturgeon’s argument.

He insisted that Ms Sturgeon will argue to Boris Johnson that the most democratic thing would be to give them the vote as that would be what most people in Scotland wanted.

Sir John said: “The argument that the UK Government and other unionists alongside them have been making and will continue to make between now and the next devolved election is that the SNP promised that the 2014 independence vote was a once in a generation event.

“The UK Government will argue that the SNP should stick to that notion.”

The polling expert revealed why this argument may not remain strong following another SNP majority.

He said: “The trouble with that argument is that while you might want to argue that your opponents should keep their promises, you cannot assume that the electorate have to be bound by those promises.

“If the SNP do go into the Holyrood election saying that we want another referendum just like 2014, that is what you are voting for.

“If they get an overall majority in that election then the UK Government will have to face questions.

“Questions like if that isn’t adequate evidence that a referendum should be held, then what would be?

“If you are talking about democracy, what message do you expect the people to send other than giving the SNP a majority.”

Boris Johnson has repeatedly said he would not grant Scotland a second referendum on independence.

He has also spoken of the importance of the union and the strength it maintains.

While speaking to Sky News he said: “It would be such a shame to lose the power and magic of that union.

“We are much stronger and better together than broken up.”