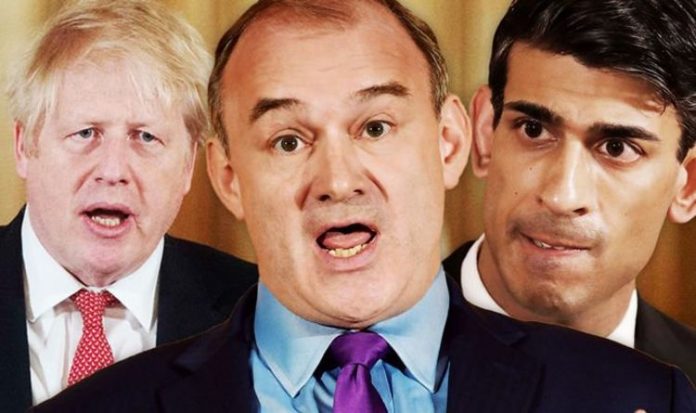 Prime Minister Boris Johnson has faced frustration — and in some cases condemnation — amid the latest attempts to curb the spread of coronavirus and prevent the dreaded second wave. The new three-tier system has already faced resistance in Greater Manchester, after the Labour mayor Andy Burnham attempted to secure more funding from Westminster to help the region through the most extreme form of lockdown. London and Birmingham are already in Tier 2, meaning the areas are at “high” alert.

Businesses are claiming this classification has left them without adequate support compared to the financial backing offered to Tier 3 businesses.

Tier 2 restrictions do not demand pubs and restaurants close, but prevent different households from mixing indoors and apply the rule of six outdoors.

In comparison, Tier 3 pushes pubs and bars which do not serve food to close.

Yet today, Chancellor Rishi Sunak tried to address these complaints and said grants of up to £2,100 per month will be available for Tier 2 businesses, even if they are not legally closed.

The new grants will be equivalent to to 70 percent of the support offered to Tier 3.

However, there is an exception within the Tier 2 rules which applies to those meeting for “work purposes”.

The guidance states that up to 30 people from different households are permitted to meet indoors in the name of work, if that area is taking secure measures.

A No.10 spokesman told the BBC that this loophole may just apply to sole traders or freelancers who do not have business premises to conduct meetings as an alternative.

Addressing this loophole, the Liberal Democrat Health spokesperson Munira Wilson told Express.co.uk: “The Government cannot expect the public to have faith in these rules if they are confusing and inconsistent.

“We need absolute transparency from Ministers about the rationale behind these restrictions, and what their priorities are when it comes to protecting public health.”

Liberal Democrat leader Ed Davey also told the BBC: “It’s increasingly clear that the Government has lost control of this virus across swathes of the country — we’ve seen it in the north and now in London.”

He noted: “I’m not clear whether these tiered restrictions in different parts of the country are actually going to stop this virus.”

His party backs a national circuit breaker instead.

Greater Manchester Mayor Andy Burnham has fought back against putting the region into Tier 3 (Image: Getty)

“The Government has given an exemption for business meetings up to 30 or meetings or gatherings that are deemed necessary for work purposes but it’s provided no guidance on where those meetings can take place.

“We’re asking for urgent clarification because in central London, if the working lunch is gone, there’s no trade.”

The discussion over meals even expanded to the House of Commons last night, when MPs rejected a plan to extend free school meals into the holidays.

It was a Labour motion to provide 1.4 million children in England with £15-a-week food vouchers during the holidays until Easter 2021, but it was defeated by a majority of 61.

Labour’s deputy leader Angela Rayner then caused a stir when she seemed to lash out at Conservative MP Chris Clarkson by allegedly dubbing him “scum” during a spat over the issue yesterday.

In comparison, iNews reported in September that the Government’s Eat Out to Help Out scheme had cost the Treasury £522million.

Ms Whittome tweeted: “There is money for half-price Nando’s but there’s no money to feed children?”

The BBC also pointed out this week: “The central bank has indirectly created and lent most of the extra money required by the government.

“Overall, the Government has not had to raise the funds from the private sector or abroad.

So, no, we aren’t really running out of cash.

“It is difficult to argue that ‘no money’ is the constraint on extending free school meals, or furlough support.”