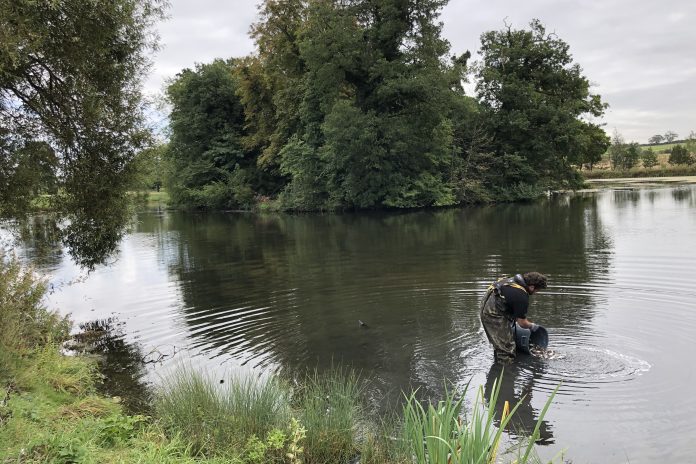 Fish bred at the Environment Agency’s national coarse fish farm in Calverton, Nottinghamshire have been used to stock the fishing lake at the Stanford Hall Rehabilitation Estate in Nottinghamshire.

Now, angling can be used to help support the rehabilitation of members of the armed forces who have been wounded, injured or sick as part of their military service and are being treated at the new Defence Medical Rehabilitation Centre (DMRC Stanford Hall).

The recent re-stocking of fish at the Duke’s Lake in the Stanford Hall Rehabilitation Estate in Nottinghamshire was the first of what is hoped to become an annual re-stocking to increase the amount and variety of fish in the lake for the benefit of anglers.

The aim is to use fishing as part of the rehabilitation process, and this huge boost of fish stocks should go a long way in helping to achieve this.

Before we re-stocked the lake we carried out a winter netting last year to establish what the fish stocks were like. As this showed that fish stocks in the lake were extremely low, we agreed to supply and deliver over 10,000 fish bred at the Environment Agency’s national coarse fish farm.

It has long been proven that green activities such as angling have a positive impact on mental health, so it is hoped that the additional fish, with a good variety for anglers, will provide a welcome boost to the rehabilitation services available at this facility.

We also established that the lake needed some floating islands as extra protection for the fish from avian predation.

Two, 2m x 6m islands with pre-planted mats and fencing, which provide habitat for both fish and bird species, will soon be installed in the lake.

The initiative to create Defence and NHS rehab establishments on a specially acquired site came from the late 6th Duke of Westminster and he considered the existence of water to be an essential element of the rehabilitation process.

The Duke’s Lake (as it is now known) is a key feature of the Estate’s parkland and setting. Re-stocking it with fish means it can be used to help patients with their rehabilitation and have a positive impact on the healing process.